Now, here are the key events that happened in the EV space during the week:

Tesla Q4 Deliveries, China Price Cuts And More: Tesla’s shares tumbled over 12% on Tuesday after the company reported fourth-quarter deliveries that came in lighter than forecasts predicted. The numbers reflected slackening of demand amid the economic slowdown and competition eating into the company’s market share.

A couple of days later, Tesla acted with a sharp reduction in the prices of its made-in-China vehicles. The price cuts were in the order of 5.7% to 13.5% and were applicable to the Model 3 and Model Y vehicles manufactured at the Giga Shanghai plant. While analysts termed the decision as a smart move to stem the erosion in market share, investors sold off the shares on fears of a further weakening of demand and a dent in margins caused by the price cuts.

In another development, Tesla listed Model S and Model Y vehicles for sale on its China website. These vehicles are not made locally, but have to be exported from the U.S.

As the Internal Revenue Service’s vehicle qualification norms for the EV tax credit allowed under the Inflation Reduction Act of 2022 were found to be negative for Tesla, CEO Elon Musk expressed concerns about the tax incentives and called upon customers to take it up with the federal agency. The IRS had solicited views from the public regarding the tax credit rules.

Rivian Production Misses Target: Rivian Automotive, Inc. (NASDAQ:RIVN) shares hit a fresh 52-week low of $15.84 this week after the EV maker announced quarterly and annual production and delivery updates. The company, which cuts its production forecast by half to 25,000 in early 2022, missed the number by a several hundred. Production stood at 24,337 units and deliveries at 20,332 units, with CEO RJ Scaringe stating that the global supply chain crisis hit production.

Lucid, Rivian Win Lawsuit Over Direct Sales: Lucid Group, Inc. (NASDAQ:LCID) and Rivian prevailed in a lawsuit brought about by the Illinois auto dealers over their direct sales models. An Illinois state trial court dismissed a complaint filed by the Illinois Automobile Dealers Association, seeking a prohibition of direct sales of vehicles to consumers in Illinois.

Lordstown’s Production Update: Lordstown Motors Corp. (NASDAQ:RIDE) said it produced 31 vehicles through Jan. 3, 2023, and delivered six of them to customers. The company also said it expects a slow rate of production through the first quarter of 2023, citing supply chain constraints, especially the hub motor components.

Read next: Tesla China And US Pricing Difference Widens Further: Model 3, Y EVs Now Up To 32% Cheaper In Asian Country 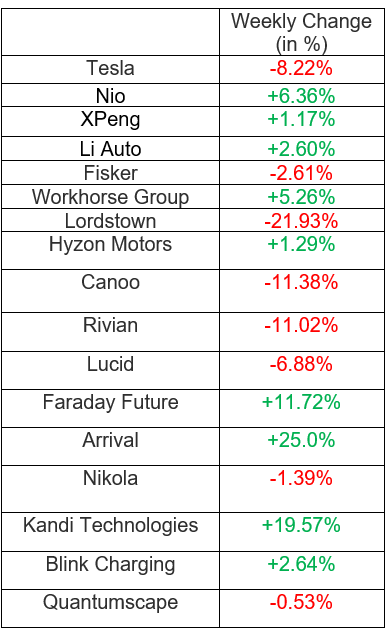