There is almost always a positive reaction in a stock when Warren Buffett’s Berkshire Hathaway Inc (NYSE: BRK-A) (BRK-B) announces his firm has taken a stake. What the issue does in the regular session sometimes differs. That is certainly the case with wood siding manufacturer Louisana-Pacific Corp (NYSE:LPX), which is the PreMarket Prep Stock of the Day.

Recent LPX Price Action: Early in the month, Louisiana-Pacific bottomed at $50.59 and has participated in the recent rally with the S$P 500 index.

Buffett’s Stake: After the close Monday, it was announced in a 13-F filing that Berkshire Hathaway had taken a $297-million stake in the building material company. This is one of the few new stakes revealed in the filing. Keep in mind the 13-F is a quarterly report and reflects activity from the last three months.

In other words, Buffett’s stake came at much lower prices than Tuesday’s opening, as the price range over the last three months was from $48.20-$65.74. Over the course of time, investors had plenty of opportunities to purchase the issue in the low-to-mid-$50 handle.

PreMarket Prep's Take: When the issue was being covered on the show, it had already spiked to its after-hours high from Monday at $65.70. Co-host Dennis Dick alluded to where Buffett might have purchased his stake.

DIck said he is not chasing the stock at current prices.

“If you want to participate in what Buffett is doing, it is better to just buy his stock.”

The author of this article was leery of the rally as well. It was emphasized that the after-hours high coincided with a daily high from Aug. 1 ($65.74) and may attract sellers if that area was revisited. 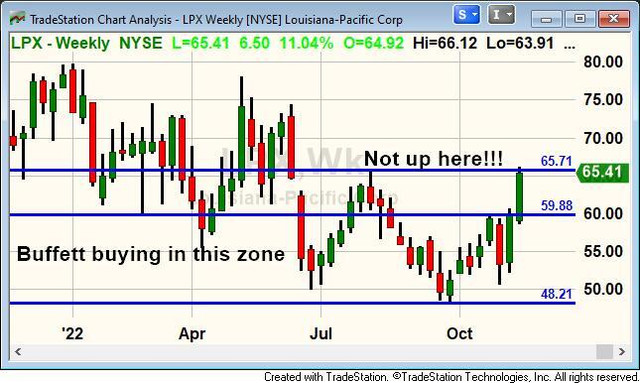 The discussion on the issue from Tuesday’show can be found here: