3 Pros On What 8.3% CPI Inflation Number Means For The Fed: 'A Strategic Error Of Epic Proportions'

The Labor Department on Tuesday reported an 8.3% year-over-year increase in the consumer price index for August, which sent the SPDR S&P 500 (NYSE: SPY) and the Invesco QQQ Trust (NASDAQ: QQQ) spiraling lower.

The Labor Department on Tuesday reported an 8.3% year-over-year increase in the consumer price index for August, which sent the SPDR S&P 500 (NYSE:SPY) and the Invesco QQQ Trust (NASDAQ:QQQ) spiraling lower.

The headline CPI rose 8.3% in August, down from 8.5% in July, according to data from the U.S. Bureau of Labor Statistics. The August CPI reading came in above average economist estimates of 8%.

3 Experts On Inflation Metric: RSM US chief economist Joseph Brusuelas said that any calls for the Fed to pause or pivot are "premature" and should be dismissed.

Brusuelas noted that global aggregate demand is "cooling at a troubling pace."

"Pulling back on the current policy path at the Federal Reserve at this point would be a strategic error of epic proportions," he said.

Mark Hamrick, senior economic analyst at Bankrate, said the August CPI is "a reminder that we don’t always get what we want."

Tuesday's CPI data represents pricing pain for consumers and pressures for businesses trying to manage through them, he said.

"The Federal Reserve looks at the August CPI and likely remains on track for another large rate hike at the upcoming Sept. meeting." Hamrick said.

Mark Putrino, chief market technician and lead educator at the Benzinga Trading School, wasn't surprised by the release like many so-called Wall Street experts were.

Putrino noted that analysts had predicted the CPI data would show a decrease in inflation, which was mostly based on the recent decrease in energy prices.

"But they were looking at the wrong things," he said.

The increase in inflation should not have come as a surprise for people who understand the market, he said, adding that soaring interest rates are a clear sign of inflationary pressure.

Putrino pointed to a 30% yield increase on the 10-year bond in just one month, which he says is an unmistakable sign of inflation. 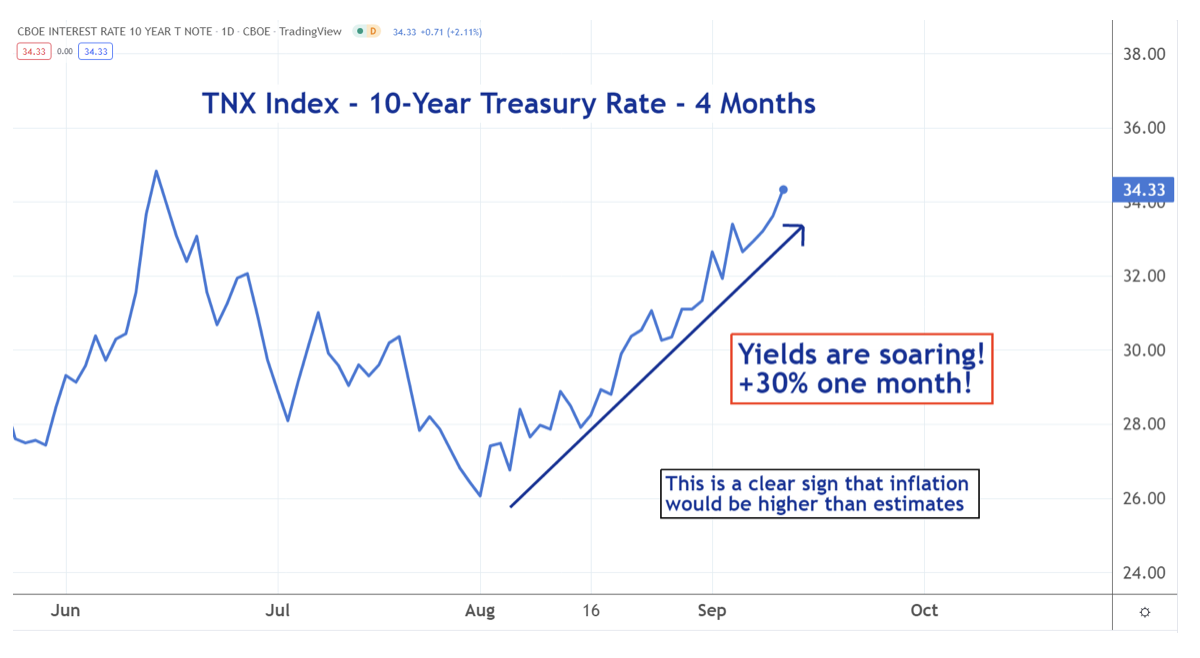 "The analysts who were surprised by this morning’s CPI release were wrong because they were looking at the wrong part of the market," he said.

The CPI Report Details: Core inflation, which excludes volatile food and energy prices, was up 6.3% in August, above average economist estimates for a 6.1% gain.

The latest CPI inflation data could act as a confirmation of recent indicators for the Fed and signal that another 0.75% rate hike is likely this month.

Tuesday's CPI print is the last major data release the Fed will have before making its next decision on rates, which is due at its upcoming meeting on Sept. 20.