Why This Oil Analyst Says Gas Prices May Head Even Higher, And What Will Bring Them Back Down

Matt Smith is the Lead Oil Analyst at Kpler, which is a leading provider of intelligence solutions for commodity markets. Benzinga had the opportunity to interview Smith and ask some questions regarding his outlook on the booming price of oil, which is on ...

Matt Smith is the Lead Oil Analyst at Kpler, which is a leading provider of intelligence solutions for commodity markets.

Benzinga had the opportunity to interview Smith and ask some questions regarding his outlook on the booming price of oil, which is on track to revisit the 2008 highs.

What are your thoughts on the CPI data that came out on Friday?

Yeah, you can see just with the market reaction to that, and really just the expectation of what the Fed is going to do next week, that’s really driven the U.S. dollar to be strong, and given the inverse relationship that you have with crude, that’s really pressuring crude down – but, I think we're really moving lower today [Friday] and just because crude is getting swept up in the contagion that we're seeing across markets here.

Also Read: US Gas Prices Hit Nationwide Average $5 Per Gallon: Why Is This Happening?

How do you feel about the incoming months? And as the market wrestles with the strange supply chains of Russia and their attempt to shift oil experts away from Europe?

From a U.S. perspective, in terms of gasoline prices at the pump, they're likely to be maintained here and push on higher as we go forward in the coming months. The thing is, though, we're not actually seeing the real impact of Russian barrels being taken off the market yet, and there are a number of other factors at play here. The reason Russia is so important is that they're one of the leading oil producers in the world. 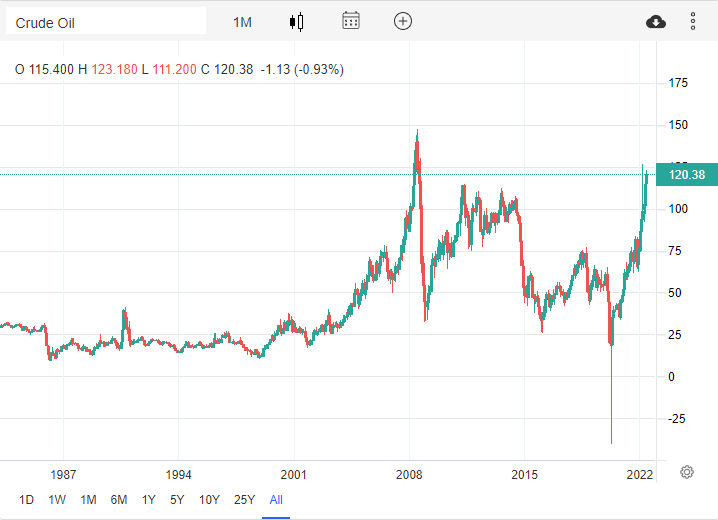 Do you think that we’re going to revisit the 2008 highs?
You have kind of all these dominoes kind of lining up for us. Yes, [we have] the Russian barrels coming off the market, but at the same time too. You have OPEC, and OPEC plus, essentially the swing supplier of the market. They’re expected to put more oil onto the market when prices get a little bit too racy. But this time around, they're really struggling to put more onto the market in a time when it is really needed... we're a hundred million barrels a day of demand. So as we look at head demanders, looking like it's going to continue to grow.

What needs to happen here to relieve the supply constraints?

I'm not sure that there's anything that can be done, aside from the Russian situation, you know, because you've got OPEC plus, and you have Saudi Arabia, who is already exporting about seven million pounds a day. If they're not incentivized to export more barrels, at $120 per barrel, then nothing is going to incentivize them. The only way that we do see prices come low is from demand destruction, but then again, you know, we're at $5 on the national average, with many states paying just above that, and we've all been pent-up for the last couple of years, you know? And so, a high price at the pump is unlikely to stop us from hopping in the car and going on a road trip this summer.

You can watch the full interview, here.