Dogecoin Breaks Down! Is The Dog Signaling A Bad Omen For Stock Market?

Dogecoin (CRYPTO: DOGE) was trading almost 8% lower on Saturday as the crypto continued to break down bearishly from a symmetrical triangle, which Benzinga poi

Dogecoin (CRYPTO: DOGE) was trading almost 8% lower on Saturday as the crypto continued to break down bearishly from a symmetrical triangle, which Benzinga pointed out on Wednesday.

The move lower was exaggerated, compared to Bitcoin (CRYPTO: BTC), which was sliding about 2% lower but in line with Ethereum (CRYPTO: ETH), which was also falling about 8%.

Traders and investors looking for weekend signals on the direction of the general markets for next week will be taking note of the bearish price action in the crypto sector, because the stock market and apex and popular cryptos have been trading in tandem lately.

The general markets have taken a beating recently and the Federal Reserve's inability to tackle soaring inflation so far has spooked investors of stocks and, seemingly, cryptos alike.

Dogecoin’s bearish break has set the crypto into a confirmed downtrend. A downtrend occurs when a stock consistently makes a series of lower lows and lower highs on the chart.

The lower lows indicate the bears are in control, while the intermittent lower highs indicate consolidation periods.

A stock often signals when the lower low is in by printing a reversal candlestick such as a doji, bullish engulfing or hammer candlestick. Likewise, the lower high could be signaled when a doji, gravestone or dragonfly candlestick is printed. Moreover, the lower lows and lower highs often take place at resistance and support levels.

In a downtrend the "trend is your friend" until it’s not and in a downtrend, there are ways for both bullish and bearish traders to participate in the stock:

The Dogecoin Chart: Dogecoin broke down from the symmetrical triangle on increasing volume, which indicates the pattern was recognized by the algorithms. At press time, Dogecoin’s volume on Coinbase was measuring in at over 245 million, with multiple hours left to go in the 24-hour session. Dogecoin’s 10-day average volume comes in at about 258 million on Coinbase. 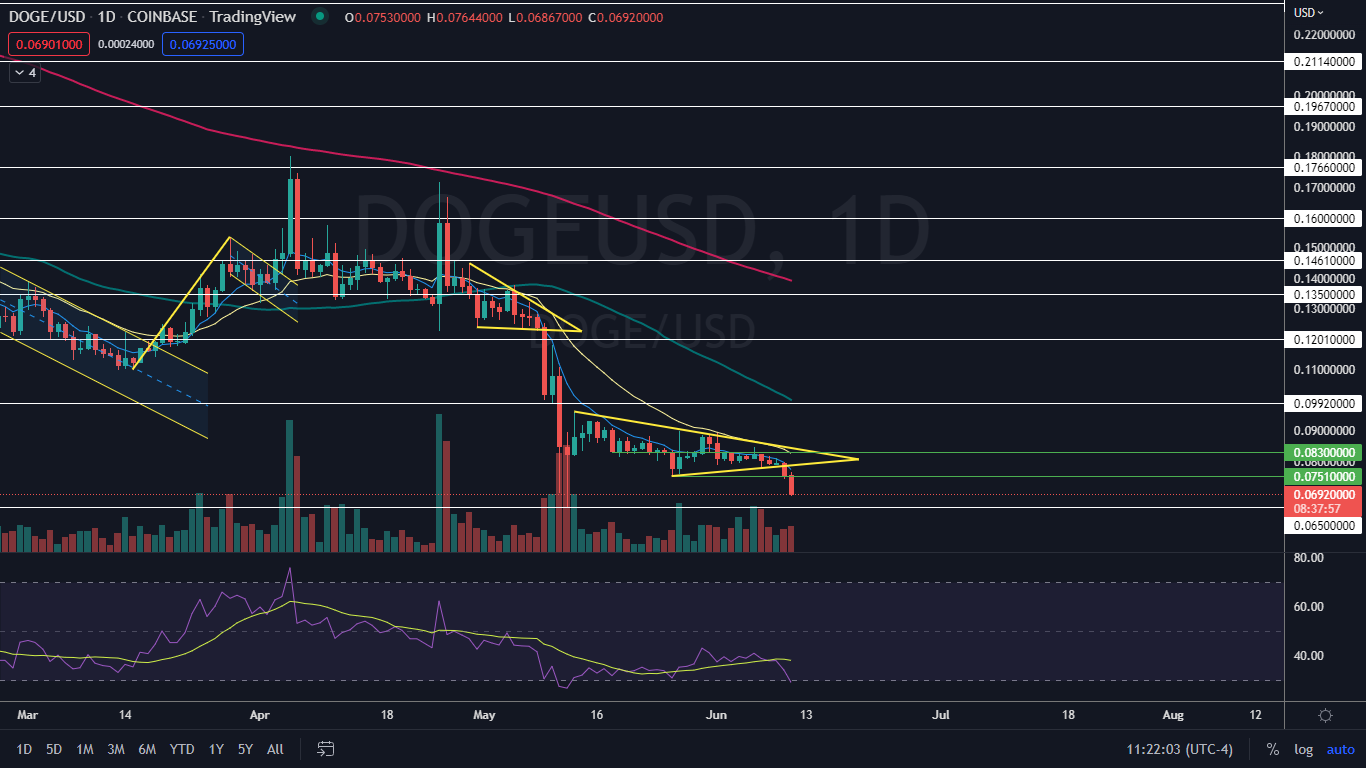