Electric vehicle stocks came under selling pressure once again in the week ending June 10 as macroeconomic fears engulfed the market. The weakness was concentrated in the final two sessions of the week, as Friday's inflation data rattled investors.

Electric vehicle stocks came under selling pressure once again in the week ending June 10 as macroeconomic fears engulfed the market. The weakness was concentrated in the final two sessions of the week, as Friday's inflation data rattled investors.

As Tesla, Inc. (NASDAQ:TSLA) continued to trade in red, the U.S.-listed Chinese EV trio managed to buck the downtrend.

Here are the key events that happened in the EV space during the week:

Tesla's Stock Split: Tesla filed a delayed proxy statement on Friday, confirming that it would seek shareholder approval for increasing the authorized share capital from 2 million to 6 million. The increase is to accommodate a proposed 3-for-1 stock split.

The filing also revealed that Oracle Corporation (NASDAQ:ORCL) co-founder Larry Ellison has decided not to seek reelection to Tesla's board following the expiry of his term at the end of the 2022 shareholder meeting.

In other news, the EV giant's production and sales rebounded in China in May, with the metrics at 32,165 units and 33,544 units, respectively. This represented a strong increase from 1,512 units and 10,757 units, respectively, in April. The fact that Tesla's China performance rebounded strongly despite running with a single shift for the bulk of the month is commendable.

It emerged during the week that Tesla, which had given up on radar, has filed with the Federal Communications Commission for a new high-resolution radar. This is speculated as being part of the upcoming Hardware 4.0 version.

With a new supercharger added in Wuhan, China this week, Tesla now has over 35,000 superchargers worldwide.

Reports suggested that Tesla's self-driving technology, named Autopilot, is being scrutinized by the Federal Trade Commission.

Related Link: Tesla Upgraded To Buy: Why This Analyst Thinks EV Maker's Operational Outlook Is Stronger Than Ever

The EV startup, however, has a credible plan, going forward. While confirming operations have returned to normalcy by June, the company said order flow continues to abound. The company also confirmed the launch timeframe of the ES7 SUV and the ET5 sedan. More importantly, the company detailed its battery ambitions and budget model EV, which will launch by 2024.

Fisker Updates On EV Timelines: Fisker, Inc. (NYSE:FSR) said orders for its Ocean SUV exceeded 50,000. The company also said it will start production of the vehicle at the factory in Austria on November 17. The PEAR EV will be revealed in the second-half of 2023 and will enter mass production at a plant jointly owned by Fisker and Hon Hai Precision Manufacturing Company Limited (OTC:HNHPF) in 2024.

Sony, Honda to Spin-off EV Unit: Sony Group Corporation's (NYSE:SONY) chief executive officer Kenichiro Yoshida reportedly said that the EV manufacturing alliance with Honda Motor Co., Ltd. (NYSE:HMC) may be spun-off as an independent unit. The companies may in the future sell a stake in the joint venture or pursue an initial public offering.

Lightyear's First Solar Car To Go Into Production: Lightyear, which is working on the world's first solar car, said its Lightyear 0 will go into production this fall. The company said the vehicle can be driven for up to seven months without plugging into a household outlet or charging station. 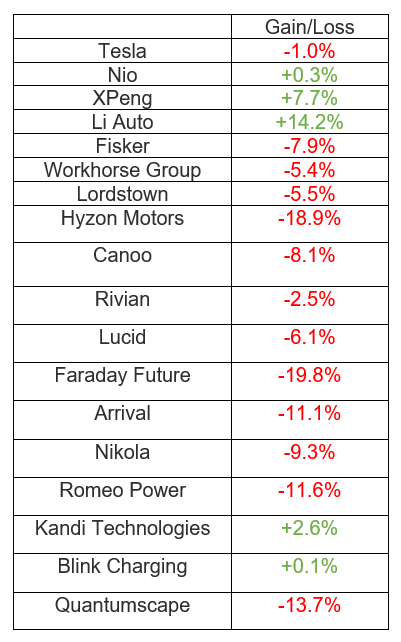 Related Link: What's Next For Nio: 4 Things The Chinese Automaker Is Planning