The anti-PD1-IL-2 is a combination of the company's IL-2 Superkine MDNA109FEAA fused to a PD-1 antibody, as shown in the following figure. The theory behind this combination is that binding of an anti-PD-1 and an enhanced IL-2 (that does not bind CD25) will prevent CD8+ T cell exhaustion while potentiating CD8+ T cells and natural killer (NK) cells.

The addition of a PD-1 antibody to MDNA109FEAA does not alter its preferential affinity to CD122 and the molecule retains no binding to CD25, as shown in the following upper image. In addition, both human and mouse anti-PD1 BiSKITs continue to show PD-1 species specificity when bound to MDNA109FEAA, as is expected. 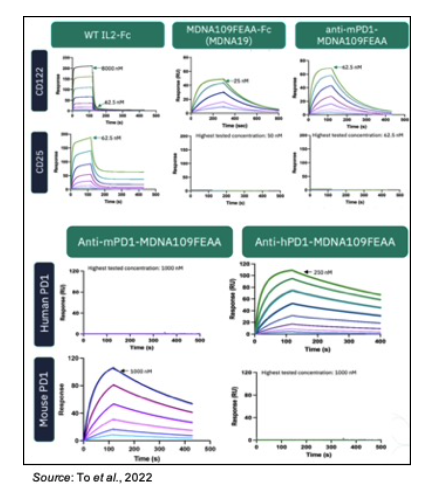 In a CT26 colon cancer tumor model, anti-PD1-MDNA109FEAA inhibited tumor growth more effectively than anti-PD1 monotherapy, MDNA19 monotherapy, or the co-administration of an anti-PD1 antibody and MDNA19, as shown in the following image.

This tumor growth inhibition leads to a significant prolongation of survival, with 100% of mice treated with anti-PD1-MDNA109FEAA (2 mg/mL) surviving compared to only 10% of vehicle treated mice and 25% co-administered anti-PD1 and MDNA19, as shown in the following image. 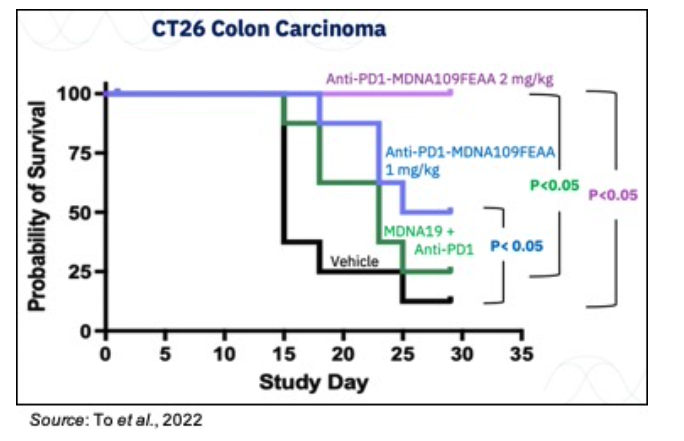 Similar results were seen in the B16F10 melanoma model with anti-PD1-MDNA109FEAA that included dose dependent inhibition of tumor growth, increased efficacy compared to co-administration of anti-PD1 and MDNA19, and a prolongation of survival.

Fc-MDNA413 is an IL-13 super-antagonist that binds to the Type II IL-4 receptor (made up of IL-4α/IL-13Rα1). An overview of IL-4/IL-13 signaling is shown below. Binding of native IL-13 to the Type II receptor activates the Stat6 signaling pathway that ultimately promotes M2 tumor associated macrophages (TAMs) and myeloid derived suppressor cells (MDSCs). Both of these cell types limit immune effector cells and promote an ‘immunologically cold' tumor microenvironment (Bhattacharjee et al., 2013). 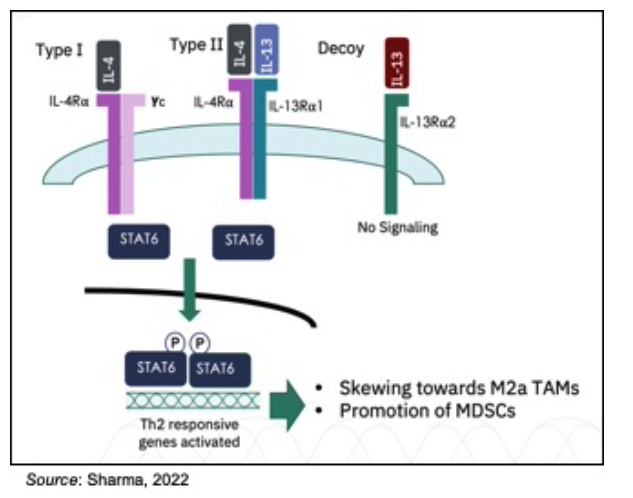 The proposed mechanism of action for FC-MDNA413 is that binding to the Type II IL-4 receptor results in blockade of signaling (as the compound is an antagonist), thus preventing the activation of Stat6 signaling and Th2 responsive genes. This in turn prevents the polarization of TAMs to an M2a lineage and inhibits the expansion of MDSCs along with their immune suppressive capabilities. 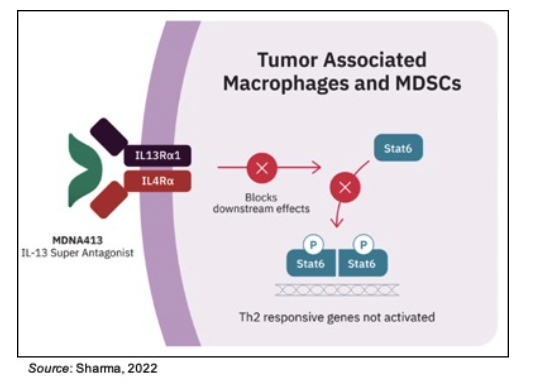 An in vitro cell-based assay shows that Fc-MDNA413 inhibits both IL-4 and IL-13 signaling. The following graphs show decreased signaling by both ligands (as measured by phosphorylated Stat6 activity) as the concentration of Fc-MDNA413 is increased. This decreased signaling inhibits the growth of TF-1 cells (a human erythro-leukemia cell line which is highly dependent on IL-4/IL-13 signaling) and also inhibits M2a polarization (as shown by a decrease in M2a cell surface markers CD206 and CD209).

Fc-MDNA413 acts both as a monotherapy an in combination with MDNA19 to inhibit tumor growth in the B16F10 aggressive melanoma model, which is poorly immunogenic and has infiltration of both TAMs and MDSCs in the tumor microenvironment. The following graph shows that combination therapy is superior to monotherapy with either Fc-MDNA413 or MDNA19. In a separate experiment, results showed that Fc-MDNA413 did not synergize with anti-PD1 therapy. 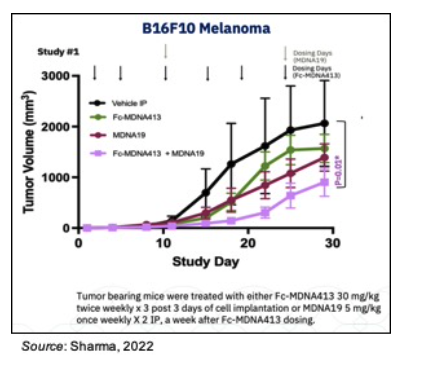 The results presented by Medicenna at AACR 2022 are very encouraging and show the company has a bright future with its BiSKIT and long-acting IL-13 super antagonist platforms. It is particularly encouraging that the anti-PD1-MDNA109FEAA molecule shows superior activity to co-administration of anti-PD1 and MDNA19 and Fc-MDNA413 shows synergy with MDNA19 since effective combination immunotherapy will likely be required in order to see sustained clinical responses. We look forward to updates from the company regarding both of these programs. The next important catalyst for the company will be a clinical update with initial efficacy data from the ongoing Phase 1 clinical trial of MDNA11, which we currently anticipate in mid-2022. With no changes to our model, our valuation remains at $12.

SUBSCRIBE TO ZACKS SMALL CAP RESEARCH to receive our articles and reports emailed directly to you each morning. Please visit our website for additional information on Zacks SCR.

DISCLOSURE: Zacks SCR has received compensation from the issuer directly, from an investment manager, or from an investor relations consulting firm, engaged by the issuer, for providing research coverage for a period of no less than one year. Research articles, as seen here, are part of the service Zacks SCR provides and Zacks SCR receives quarterly payments totaling a maximum fee of up to $40,000 annually for these services provided to or regarding the issuer. Full Disclaimer HERE.