On April 8, 2022, ESSA Pharma, Inc. (NASDAQ:EPIX) announced that preclinical data for the company's first-generation androgen receptor (AR) ANITen bAsed Chimera (ANITAC™) N-terminal domain (NTD) degraders was presented at the 2022 American Association for Cancer Research (AACR) annual meeting. A copy of the poster can be accessed here.

This is the first time the company has presented data on its ANITAC program, which represents a novel means of targeting the AR. The following figure shows a cartoon representation of an ANITAC, which consists of an aniten (a compound that targets the NTD of the AR) connected to an E3 ligase binder through a flexible linker.

After the ANITAC compound binds the AR and the E3 ligase, the AR is ubiquitinated and degraded via the ubiquitin proteasome system (UPS), as shown in the following figure. Components of the UPS include: ubiquitin (Ub) - a 76-amino acid protein that is attached to proteins via a lysine residue to mark them for degradation; E1 – a Ub activating enzyme; E2 – a Ub conjugating enzyme; E3 – a Ub ligase. E1 transfers a Ub protein to E2 and E3 catalyzes the transfer of the Ub protein from E2 to the targeted protein (Molineaux, 2012). At least four Ub molecules must be attached to the target protein (in the form of a polyubiquitin chain) before it can be recognized by the proteasome for degradation (Thrower et al., 2000). Since the ANITAC molecule contains an aniten that targets the NTD of the AR, it has the potential to degrade any form of clinically relevant AR including those that have ligand binding domain (LBD) truncated splice mutants. 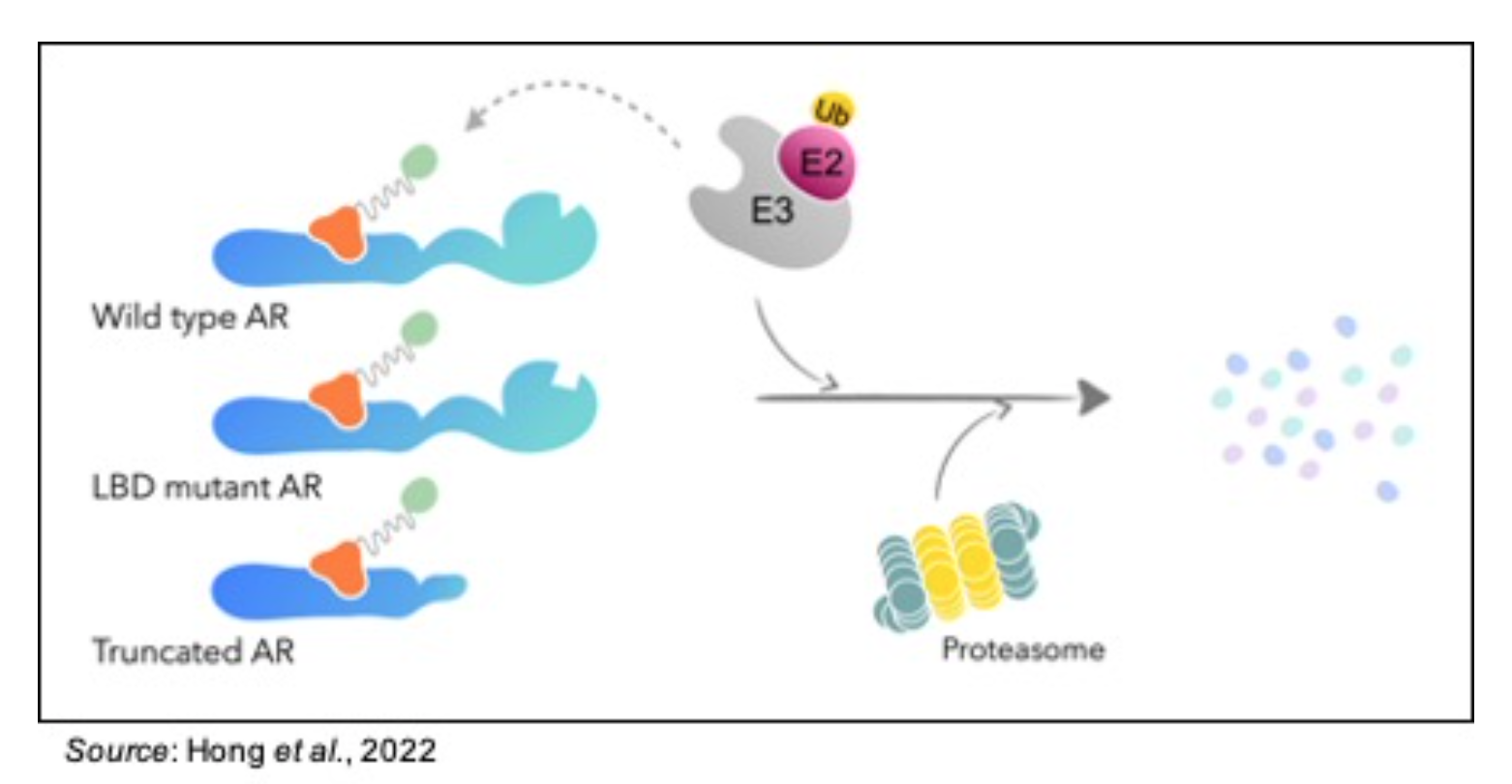 As an example of how an ANITAC can degrade both full-length and truncated AR, the following figure shows full-length (AR-FL) and truncated (AR-V7) AR following treatment of the VCaP prostate cancer cell line with ANITAC EPI-8207 or ARV-110, a PROTAC® protein degrader being developed by Arvinas Therapeutics (ARVN). The treatment occurs both in the presence (+) and absence (-) of MLN4924, a neddylation inhibitor. Neddylation is a post-translational modification similar to ubiquitination, thus inhibiting the process leads to an inhibition of proteasomal protein degradation. Treatment with both EPI-8207 and ARV-110 resulted in a decrease in AR-FL with increasing concentration of drug. This process was also inhibited in the presence of MLN4924, showing the decrease in AR protein is due to proteasomal degradation. However, while EPI-8207 also led to the degradation of AR-V7 protein at the higher concentrations tested (which was also inhibited by MLN4924), there was a minimal decrease in AR-V7 protein following ARV-110 treatment.

The degradation of the AR leads to a decrease in AR transcriptional activity. The following graphs shows the decrease in expression of an AR-driven reporter gene as a function of ANITAC concentration. ANITACs are able to inhibit AR transcriptional activity driven by AR-FL (expressed in LNCaP cells), AR-V7 (expressed in LNCaP95), and AR-V567es (expressed in CWR-R1-D567). In contrast, ARV-110 does not inhibit AR-driven expression in cells that express the AR splice variant AR-V567es.

ANITACs have the potential to disrupt AR-driven transcriptional activity in two ways: 1) inhibition of AR activity by binding to the NTD; and 2) degradation of the AR through the UPS. This is exhibited in the following figure that compares the inhibition of AR transcriptional activity for the aniten EPI-7386 and the ANITAC EPI-8207 with or without an E3 ligase inhibitor in LNCaP cells. EPI-8207 appears to inhibit AR transcriptional activity better than EPI-7386, however when an E3 ligase inhibitor is added the activity of the two compounds is similar. This implies that the targeted degradation of the AR through the UPS, in addition to AR activity inhibition through binding to the NTD, could result in greater knockdown of AR activity and potentially lead to superior clinical outcomes. 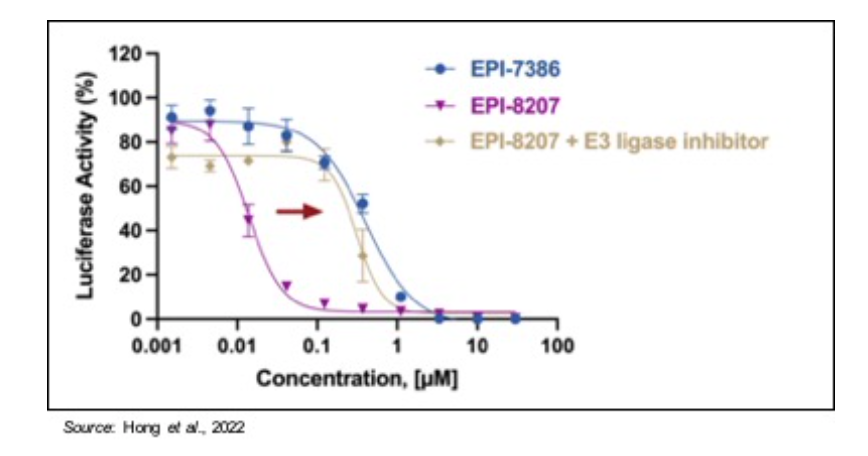 Targeted protein degradation (TPD) was first reported in 2001, in which researchers successfully caused the UPS-mediated degradation of MetAP-2 through a ‘protein-targeting chimeric molecule (Protac-1)' that consisted of an IκBα phosphopeptide (that binds the ubiquitin complex Skp1-Cullin-F box) and ovalicin (that covalently binds MetAP-2) (Sakamoto et al., 2001). Since that time a number of advances have been made in TPD and the field has advanced with multiple TPD compounds now in clinical trials. TPD is an exciting field of study as it opens the possibility to target the hundreds of potential proteins in multiple disease pathways that are considered ‘undruggable' using current pharmacological approaches.

Bifunctional degraders: These compounds consist of two molecules coupled by a flexible linker. One of the molecules binds to a protein-of-interest and the other molecule binds to an E3 ligase. Bringing a target protein in close proximity to the E3 ligase causes ubiquitination and subsequent entry of the target protein into the UPS for degradation by the proteasome.

Molecular glues: These are compounds that facilitate the interaction between a ubiquitin ligase and a protein of interest. Examples of molecular glues include thalidomide, lenalidomide, and pomalidomide (Asatsuma-Okumura et al., 2019). That class of compounds was shown to exert anti-cancer effects by binding the E3 ligase cereblon (CRBN) and its transcription factor IKZF1/3, leading to the degradation of IKZF1/3.

A number of companies are developing TPD molecules, including:

C4 Therapeutics (CCCC) – C4 is developing MonoDAC (molecular glue) and BiDAC (bifunctional) degraders. The company's lead asset CFT7455 is currently in a Phase 1/2 clinical trial for the treatment of multiple myeloma. Following a recent update, the company's stock fell 60% after it was revealed two of four patients in the 50 μg cohort had to reduce their dosage due to toxicity. The company's current market cap is approximately $400 million.

Monte Rosa Therapeutics (GLUE) – Monte Rose is developing molecular glues utilizing the company's QuEEN platform. The lead program GSPT1 is currently in pre-IND studies and will be developed for the treatment of different types of cancer. The company's current market cap is approximately $600 million.

In addition, we believe that multiple large pharmaceutical companies have devoted considerable resources into evaluating various TPD platforms. It's difficult to make direct valuation comparisons between these companies and ESSA since ESSA only has one TPD program, albeit with very encouraging preclinical data. But what is clear is that companies with TPD programs appear to command premium valuations, even for early stage assets.

The data presented by ESSA at AACR 2022 was very exciting as it represented the first time that the company's TPD program had been showcased. The program is still at a very early stage; however, we believe ESSA is off to a great start based upon the data generated thus far. We will be following the development of the TPD assets very closely as they advance to the clinic. We remind investors that the company will be providing an update on the Phase 1 monotherapy trial of EPI-7386 in the first half of 2022 and an update from the combination trial of EPI-7386 and enzalutamide in the second half of 2022. Even though its early stage, we have added the TPD program to our model, which has slightly increased our valuation to $45 per share.

SUBSCRIBE TO ZACKS SMALL CAP RESEARCH to receive our articles and reports emailed directly to you each morning. Please visit our website for additional information on Zacks SCR.

DISCLOSURE: Zacks SCR has received compensation from the issuer directly, from an investment manager, or from an investor relations consulting firm, engaged by the issuer, for providing research coverage for a period of no less than one year. Research articles, as seen here, are part of the service Zacks SCR provides and Zacks SCR receives quarterly payments totaling a maximum fee of up to $40,000 annually for these services provided to or regarding the issuer. Full Disclaimer HERE.