EV stocks continued to be under pressure in the week ending April 29, with Faraday Future Intelligent Electric Inc. (NASDAQ:FFIE) and Arrival (NASDAQ:ARVL) and Tesla, Inc. (NASDAQ:TSLA) leading the declines. The stocks took cues from the broader market, which wilted under the impact of multiple headwinds.

Supply chain constraint and input cost inflation are two big risks threatening to derail the ongoing EV momentum. All eyes are on the COVID situation in China, given the country is vital from the perspective of both demand and supply.

Here are the key events that happened in the EV space during the week:

Tesla Stock Sale: Tesla stock retreated sharply during the week amid fears that chief executive officer Elon Musk may have to sell shares in the company to finance his proposed Twitter, Inc. (NYSE:TWTR) buy. Promptly, Musk disclosed in a late Thursday filing that he has sold 9.6 million shares of Tesla stock, valued at $8.5 billion. The consolation for Tesla investors is the assurance from Musk that he will not sell any further stock.

Cathie Wood's Ark Invest was also a seller in Tesla stock this week.

Ford Launches F-150 Lightning: Ford Motor Company (NYSE:F) held the launch event of its much-awaited F-150 Lightning pickup truck at its Rogue EV Center on Tuesday. CEO Jim Farley said the first vehicles will begin shipping to customers in the next few days. The company affirmed its goal of delivering over 2 million EVs a year by 2026, potentially challenging market leader Tesla. Blue Oval also suggested that another electric pickup truck is in the works.

Nio ET5 Update: Nio, Inc. (NYSE:NIO) had two announcements this week that confirmed the company is executing despite the supply challenges. The company said Friday the first tooling trial builds of the ET5 sedan, its fifth production model, has rolled off the production line at its NeoPark smart EV manufacturing plant. Mass production of the model will officially kick-start in the third quarter, the company confirmed.

Earlier this week, the company said it achieved a major production milestone, as the 200,000th EV rolled off the line at its Hefei manufacturing plant. The company said the feat was accomplished in less than four years, with the second 100,000 vehicles manufactured in around a year.

BYD Earnings: BYD Company Limited (PNK: BYDDF) was the first among the U.S.-listed Chinese EV manufacturers to report its first quarter earnings. The Warren Buffet-backed automaker reported 63% year-over-year revenue growth and 240% net profit growth for the first quarter. The company also announced this week that its flagship Han EV sedan is being made available in Brazil.

Nikola Delivers Tre Semitruck: Nikola Delivers Tre Semitruck: Nikola Corporation (NASDAQ:NKLA) said it began shipping the first semitrucks, named Tre, to customers and has commenced serial production of the same. The company marked the occasion with an event at its Coolidge, Arizona plant, which was attended by Governor Doug Ducey, fleet customers and state government officials. The company said it plans to boost annual production capacity to 45,000 units a year from now.

Meanwhile, Tesla's semitruck has been in the works for several years now, and deliveries of the vehicle may not occur until 2023.

Lucid Announces EV Supply Contract: Lucid Group, Inc. (NASDAQ:LCID) announced a contract from the Saudi Arabian government for delivering up to 100,000 EVs over the next decade. The vehicles will be manufactured at the company's Arizona plant as well as the international manufacturing plant it has planned to construct in Saudi Arabia. 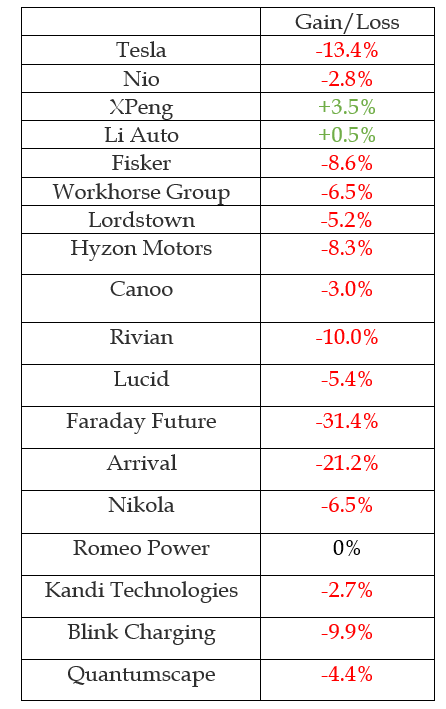