ApeCoin (APE-USD) investors have been unable to keep their eyes off of the token this week as APE posted market-beating gains. The Bored Ape Yacht Club-inspired crypto has been receiving attention as investors prepare for a big metaverse event set for this weekend. Today, though, APE crypto news is taking a turn, with developers ditching a planned land auction in favor of a more straightforward sale. 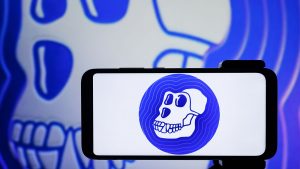 ApeCoin is a crypto developed by fans of Yuga Labs’ non-fungible token (NFT) collection Bored Ape Yacht Club (BAYC). A governance token, APE was created as a way to decentralize the BAYC ecosystem from its developers. Holders can use their tokens to vote on community proposals. Meanwhile, Yuga Labs has leaned into APE by planning to accept the token for future merchandise. More importantly, it is using APE as the official currency of the Otherside metaverse.

Otherside is the first major expansion by Yuga Labs on its BAYC tokens. The virtual space will see the Apes represented in the NFTs coming to life. As a part of the Otherside rollout, Yuga announced plans to conduct a Dutch-style land auction for plots of real estate within the space. Of course, these auctions were set to take place with APE as the currency used to bid.

With the auction planned for tomorrow, April 30, investors have been able to watch APE crypto prices boom. The token is seeing a 50% gain on the week thus far. And with the planned Dutch-style auction, holders have been rushing to scoop up as much APE as they can. This is because with the Dutch format, bidders offer up the amount they are willing to pay, and the plots are delivered to those willing to pay the most.

It seems that Yuga Labs has decided that this style lends to kindly toward APE whales, making for an unfair advantage. As such, the company decided on Thursday to ditch this auction format. Instead, Yuga Labs has announced plans to sell plots at a flat price of 305 APE. At current prices, that totals just under $7,000.

The announcement is great news for less wealthy ApeCoin holders. By removing the Dutch-style auction format, plots will be decided only by who can make their purchases the fastest. With this announcement, one might suspect APE volumes to start trending down. With a flat price, there is no need to accrue as much APE as possible to secure a winning bid. However, that is not the case. APE volumes are continuing to trend upward. So far today, over $6.7 billion worth of APE is trading hands. This marks a 200% increase in volume over yesterday.

Prices are staying in the green as well, with APE up 1% while most other cryptos trend in the red.

The post The ApeCoin Crypto Is in the Spotlight as Yuga Labs Ditches Otherside Metaverse Auctions appeared first on InvestorPlace.