Many Chinese stocks are rallying today. Among the factors triggering the surge are promises by leadership of China’s ruling Communist Party to support the country’s economy in general and “platform” companies in particular. The latter firms provide internet-based services, such as ride hailing, e-commerce and food delivery. 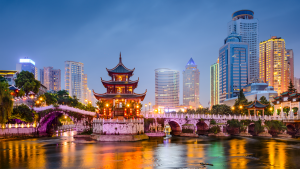 What Is Happening With Chinese Stocks

During its meeting today, the key committee of China’s Communist Party, called the Politburo, said that it would look to boost the economy by helping small businesses and firms hurt by the government’s recent Covid-19 containment measures. The Politburo also stated that it would increase the amount spent by the government on the country’s infrastructure and seek to strengthen China’s supply chains.

In its comments on tech companies, the committee promised to “complete the special rectification of the platform economy” and implement measures backing the sector. The latter statements were widely seen as meaning that Beijing would, at least for a brief period, ease the regulatory pressures that it had placed on China’s tech firms for many months.

Separately, in a report that’s being viewed as positive for many Chinese stocks, The South China Morning Post stated that the country’s foremost officials would hold a “symposium” in partnership with a number of leading Chinese internet companies, including Alibaba and Tencent (OTCMKTS:TCEHY).

On the date of publication, Larry Ramer did not have (either directly or indirectly) any positions in the securities mentioned in this article. The opinions expressed in this article are those of the writer, subject to the InvestorPlace.com Publishing Guidelines.