Will The NFP Pull The S&P 500 Down This Friday?

#interestingfact: The S&P 500 has not had a 5%+ drawdown from a peak for the past ten months.

#interestingfact: The S&P 500 has not had a 5%+ drawdown from a peak for the past ten months.

This timeframe equates to over 200 sessions. As this hot run continues, more and more analysts come out of the woodwork, predicting that it will shortly come to an end. Perhaps these analysts are correct, and the S&P 500 will hit a wall at 4,500, a value the index crossed for the first time last Friday. Coincidently, it was also the time the S&P 500 hit its 8th 100-point day for 2021.

Of course, this consistent rise of the SPX is out of the norm and, therefore, concerns investors. While we cannot control the unforeseeable, we can follow the market announcements coming out of the US (or other appropriate regions) that might keep us abreast of possible changes in market sentiment and direction.

It is an atypically quiet week on the US reports front. It is not until Wednesday that the big boy reports are released.

The precursor to the Non-farm Payroll, the ADP Employment Change report, is forecasting 500K jobs added to the US private sector economy in August. Bear in mind that this report’s estimates were off by more than 70% (330K vs 695K expected) last month.

If the ADP Employment Change number comes in at 500K, it will signal a big turnaround for the private sector job placement, which has steadily declined since a record 882K jobs in May. This decline could be forgivable if the 20 million jobs lost in April 2020 had since been regained. However, as it stands, the US economy is still down a net 4 million jobs. 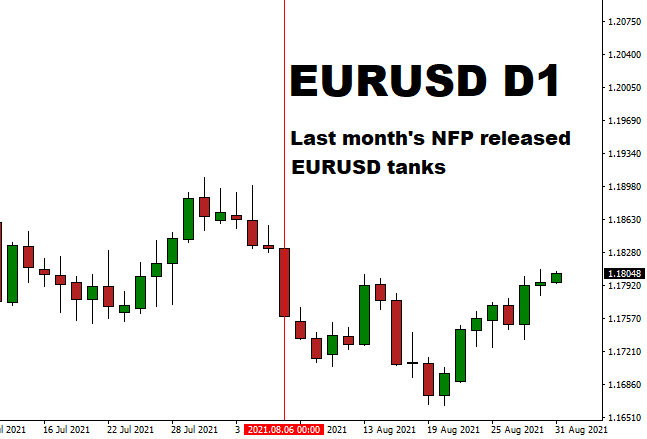 NFP creeps in on Friday

The consensus is that 750K jobs have been added to the US economy in August, more than 100K less than expected last month. But, as we all know, NFP beat the expectations of July by a significant number and injected a great deal of optimism in the USD (see EURUSD chart).

How did this big NFP beat translate on the S&P 500?

For the past four NFP job reports, we can observe a pattern.

When the NFP disappoints, the S&P 500 has a rough few days. This rough patch is clearly illustrated in May, where the NFP reported a paltry 266K jobs vs an expected 978K. What ensued on the following Monday was three days of selling, resulting in the S&P 500 falling from 4,233 to 4,058. The SPX didn’t gain back those losses until the day before the next NFP was released.

When the NFP beats, the S&P 500 falls, but by far less than when it misses. This begs the question: What will it take for the S&P 500 to react positively? I think it is waiting for an NFP to report more than a million jobs, like last reported in August 2020 (July Job numbers). Otherwise, the Russel 2000 Index will be the biggest beneficiary of the positive, but not grand, NFP reports.