Unprecedented IPO Demand: Data Shows The Initial Public Offering Surge Of 2020 Is Just The Beginning Of A Public Listing Frenzy

At the very end of a chaotic 2020 for IPO listings, the Wall Street Journal issued a timely warning that the “euphoria” for initial public offerings is unlikely to wear off in the new year.

At the very end of a chaotic 2020 for IPO listings, the Wall Street Journal issued a timely warning that the “euphoria” for initial public offerings is unlikely to wear off in the new year. Recent data shows that this excitement for listings appears to be much more widespread than many market commentators could have imagined - with the records of the past year looking set to be blown away by 2021’s momentum.

So far in 2021, global IPO listings have topped 430 offerings, raising an astounding $105.6 billion - more than three times the total proceeds from the quarter before.

The COVID-19 pandemic has played a role in this significant ramping up of market momentum for IPOs, with $67.3 billion raised in the US alone in Q4 of 2020 - a figure that’s around six times the total from the first three months of the year as the world descended into the health crisis.

This widespread scramble saw some of the largest startups of the 21st Century like Airbnb Inc (NASDAQ:ABNB), DoorDash Inc (NYSE:DASH) and Palantir Technologies Inc (NYSE:PLTR) pick their moment to go public - enabling retail investors to buy shares in the companies for the first time and start building up their investment portfolio.

The IPO frenzy of 2020 was unexpected, to say the least. When the spread of COVID-19 led to the shutting down of significant facets of global economies and a subsequent drop in the stock market, many IPO watchers will have undoubtedly braced themselves for another disappointing year following on from an underwhelming 2019.

Instead, investors were treated to unprecedented volumes of IPOs launched around the world, and there’s mounting evidence to suggest that 2020 was only the tip of the iceberg.

The Rise and Rise of SPACs

IPOs flew out of the traps as 2021 was just beginning, with Nasdaq listing 91 companies with a 76% overall win rate in January alone as more businesses appeared set to bank on an investor-friendly new year market.

Out of the new listings, 67 were special-purpose acquisition companies (SPACs), while three were switches. New York appears to be a significant part of the SPAC and IPO boom, with the top three IPOs listed in January arriving on Nasdaq as well as seven of the top 10 IPOs by proceeds were also listed on the market.

Speaking to Bloomberg, Jeff Thomas, Nasdaq’s senior vice president and head of West Coast listings highlighted that SPACs will continue to play a significant role in ramping up the volume of IPOs that we see enter the market in the near future:

“When you look at it, the capital markets are very richly valued right now so the window is wide open,” Thomas said. “We’ve got over 250 active SPACs out there looking for targets now," Thomas said. "So, I think one of the other big stories this year will be all of the business combinations that will be coming into the markets as well.” 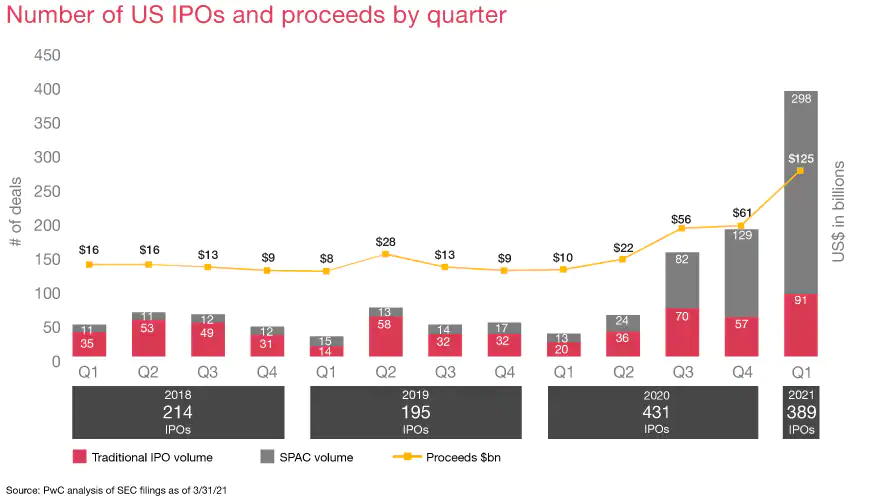 The chart above illustrates the sheer presence that SPACs have afforded themselves on the market. Where there were never more than 27 SPAC-based IPOs coming to market before 2020, Q1 of 2021 has hosted 298 SPAC IPOs alone.

Why Investors Are Enticed by SPACs

While SPACs used to operate largely outside of the mainstream, they’ve become a lot more commonplace over the past 12 months, and are clearly increasing in popularity each quarter. Let’s take a look at why SPACs have become a market driving force.

The first reason behind the rise of SPACs is down to supply and demand. The number of public companies has gone down over the course of the 21st Century - dropping from 8,000 to closer to 4,000 today - but the amount flowing into public markets has been increasing at the same time. This is because stock exchanges make their money by bringing on new companies - pushing SPACs more conspicuously into the market.

Then there’s the private equity market to consider. There has been a huge increase in the amount of capital invested in private equity to over $2 trillion dollars today, but the number of exits has declined. Private equity-backed portfolios are always on the lookout for opportunities to exit and make a return - which helps to support the SPAC model.

Finally, SEC regulations have become more involved in regulating SPACs, giving them more validation in the world of investing. The SEC has stepped in to set fixed prices for each IPO while regulating voting and redemption rights to aid all parties involved in the process.

In fact, according to Maxim Manturov, Head of Investment Research at Freedom Finance Europe, the regulatory landscape has decisively changed to favor the flow of investment in IPOs and SPACs in general as a conscious means of boosting the financial landscape in the wake of the COVID-19 pandemic.

The pandemic supplied additional reasons for the retail investment market to grow. "To support the economy, most countries adopted stimulating policies, which brought both the loan and deposit interest rates to the historic lows,” Manturov explained. “As an alternative to low-rate deposits, many started investing their savings into stock markets, which posted significant gains last year despite the lockdown and the production slump."

The sheer volume of SPACs lurking and the favorable regulatory conditions across global markets means that we’re unlikely to see the IPO gold rush slow down any time soon, leaving investors with a golden opportunity to study an expanding market for fresh opportunities to buy into companies with big potential. The 2020 initial public offering boom was just the beginning of what appears to be an IPO frenzy.