Palantir Technologies Inc (NYSE: PLTR) is set to report first-quarter earnings before the opening bell Tuesday and traders will be watching closely to see how the stock reacts.

Palantir Technologies Inc (NYSE:PLTR) is set to report first-quarter earnings before the opening bell Tuesday and traders will be watching closely to see how the stock reacts.

When Palantir printed its fourth-quarter 2020 earnings on Feb. 16 its stock gapped down almost 6% despite the company beating expectations. Palantir reported revenue of $322 million, a 40% increase from the same period the year prior. The company’s earnings per share came in at 6 cents, beating the consensus estimate of 2 cents.

On May 3, a number of Palantir options traders bet over $1.34 million that shares of the company were headed lower, and so far those traders have been right.

A stock’s reaction to earnings can often be arbitrary, however, and those options traders may have already profited on their puts and sold them. The chart can give clues as to where Palantir’s stock is headed next.

The Palantir Chart: On Monday, Palantir’s stock gapped down to the middle of a bullish falling wedge it has been trading in since Feb. 22. The stock has been making consistent lower highs and lower lows within the pattern. Even when Palantir has broken up bullish from the pattern, on two separate occasions, it has failed to make a single higher high.

Palantir’s stock is trading below both the eight-day and 21-day exponential moving averages, which is bearish, and both of the indicators will act as resistance in the future. Last Thursday, Palantir lost a key support level near the $21 level, and that is also now resistance.

On Monday morning, Palantir’s stock had a relative strength index of about 27%, indicating that it's in oversold territory. This indicates a bounce is needed to elevate the RSI back up above 30%. 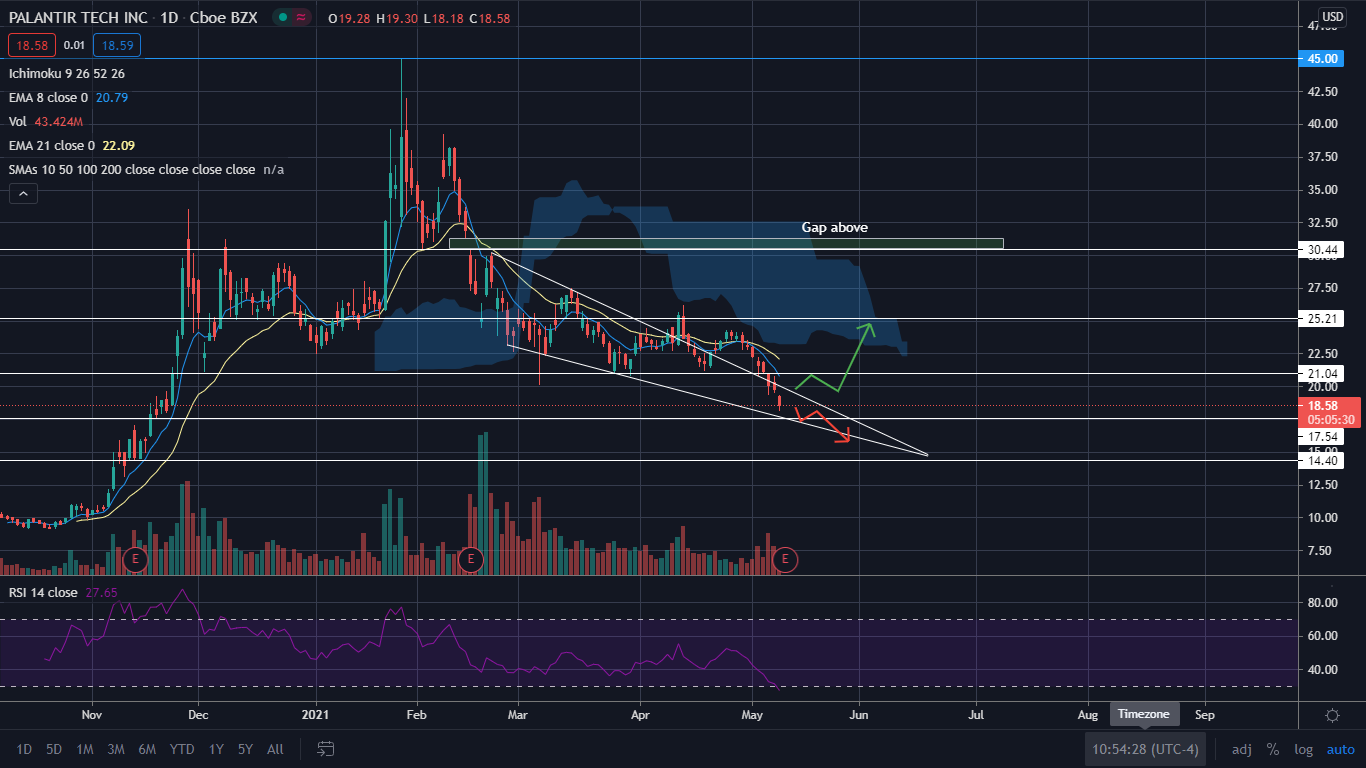 Bulls want to big bull volume come into Palantir’s stock following its earnings and for it to make a convincing break up from the falling wedge and over resistance at $21.04. The stock does have the overhead gap left from its last earnings print near the $30 mark, and since gaps fill 90% of the time, it’s likely Palantir will trade back at that level in the future.

Bulls do not want to see Palantir fall below the bottom descending line of the falling wedge.

Bears want to see Palantir’s stock continue to fall in its wedge until it loses support at $17.54 or for the stock to drop below the falling wedge. If the stock loses either of those areas as support, it could fall as far $14.40 before getting a potential bounce.