Starbucks Set Up A Triangle: How To Play It

With Starbucks Corporation's (NASDAQ: SBUX) earnings out of the way traders don’t have to worry about an unpredictable reaction and can focus on patterns in its chart.

With Starbucks Corporation's (NASDAQ:SBUX) earnings out of the way traders don’t have to worry about an unpredictable reaction and can focus on patterns in its chart.

Although Starbucks reacted in a bullish manner to its positive earnings, the stock never broke from a symmetrical triangle pattern it has been trading in since its April 19 all-time high of $118.97. Starbucks could hit the apex of the symmetrical triangle at 1:30 p.m. ET on May 13, which indicates that on or before that time Starbucks’ stock will break either up or down from the triangle. Bullish and bearish traders may be wondering how to play the triangle.

The Starbucks Chart: On the four-hour chart, Starbucks has been consolidating in the triangle, making lower highs but higher lows as its price tightens towards the apex. Starbucks is pinned between the eight-day exponential moving average (EMA) and the 21-day EMA, which shows indecision.

Bullish volume could easily cause Starbucks to recapture the 21-day EMA, which would be bullish. Starbucks is trading 6.5% above the 200-day simple moving average (SMA), which indicates overall sentiment in the stock is bullish. 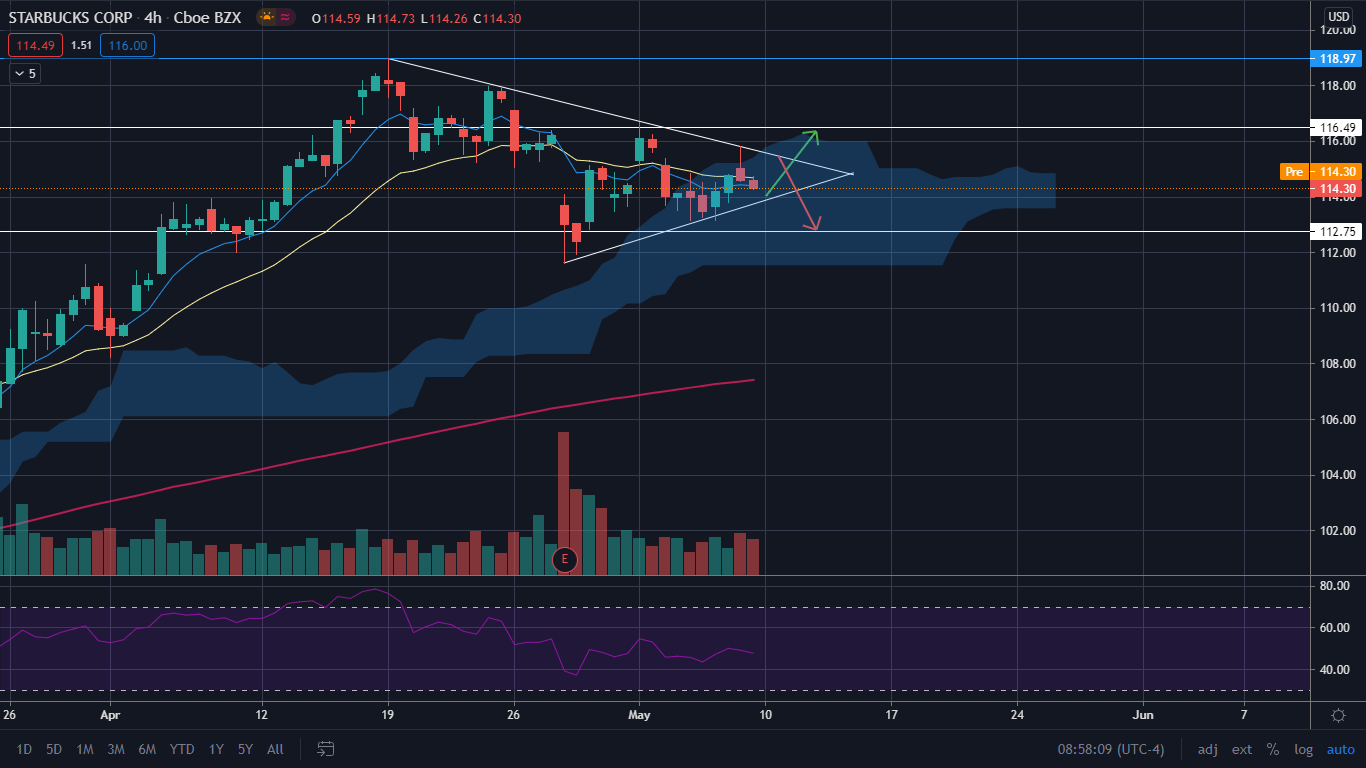 How To Play Starbucks’ Triangle: Traders may be looking to take a position in Starbucks to play the eventual break of the triangle. There is a play for both the bulls and the bears, in a symmetrical triangle, with good risk to reward and a distinct place for each trader to place a stop order.

Placing a “stop” means a trader has a price in mind for where they will sell the stock for a small loss and leave the trade.

If Starbucks’ rejects that level bullish traders may decide to sell their positions at that point. Bulls would place their stop under the lower sloping trendline of the triangle because if the price drops below the line it could go even lower.

Bears can take an entry into this stock any time Starbucks’ touches the top downward sloping line of the triangle and hold it for an eventual bearish break south. The opposite to how the bulls will play this pattern, bears will place a stop and sell their shares if Starbucks breaks up north from the triangle. If Starbucks breaks bear it has room to fall to $112.75 before meeting a support level.

If Starbucks’ stock does not fall through that level, bears may want to sell their shares as it could bounce back up.