Why Is Dogecoin Refusing To Budge As Elon Musk Gives One Push After Another?

Dogecoin (DOGE) has the high-profile support of Tesla Inc (NASDAQ: TSLA) CEO Elon Musk, who mentioned the meme cryptocurrency several times during his “Saturday Night Live” appearance, but the result in terms of price has not been as spectacular as some ex...

Dogecoin (DOGE) has the high-profile support of Tesla Inc (NASDAQ:TSLA) CEO Elon Musk, who mentioned the meme cryptocurrency several times during his “Saturday Night Live” appearance, but the result in terms of price has not been as spectacular as some expected.

What Happened: The Shiba Inu-themed cryptocurrency has plummeted to as low as $0.4257 since the airing of the SNL episode.

Last week, the buzz around the variety show took the joke cryptocurrency to new heights as it touched $0.73 on May 8.

The cryptocurrency is yet to get anywhere near the $1 mark, which is the stated pump target of many investors on social media, despite Musk’s frequent pushes.

Ethereum Classic (ETC), another currency that has shot up in parallel with the latest DOGE rally, is l up 163.61% in terms of weekly gains.

A noted proponent of ETC and BTC, Barry Silbert, CEO Of Digital Currency Group, challenged the DOGE community to convert their DOGE to BTC disclosing he is betting against the meme coin.

Okay $DOGE peeps, it's been fun. Welcome to crypto!

Silbert made his challenge to the “Doge Army” even more “interesting” by saying he would donate $1 million to a charitable cause selected by the Dogecoin community should DOGE hit $1 by May 31.

And to make it interesting, if $DOGE hits $1 by May 31st, we'll donate $1 million to a charitable cause selected by the Dogecoin community https://t.co/Cm34dbB2XF

Why It Matters: The lack of momentum towards $1 in DOGE is certainly not due to the lack of a push by Musk.

Musk mentioned DOGE as a potential mother’s day gift standing alongside his mother Maye Musk on SNL, she was left unimpressed.

Musk also participated in an extensive skit on DOGE with SNL’s Michael Che. Dressed up as a financial expert he was at pains to explain “what is Dogecoin?”

Lloyd Ostertag stopped by the desk to talk cryptocurrency. pic.twitter.com/cuILxOBJlj

On Sunday, a Canadian company said it was sending a “DOGE-1 Mission to the Moon” in the shape of a lunar satellite onboard a SpaceX Falcon 9 rocket. Musk also heads SpaceX and took note of the development on Twitter.

SpaceX launching satellite Doge-1 to the moon next year

Musk said that the mission was paid for in Doge and claimed that this would make the cryptocurrency in space and the first meme in space. He included a song about taking Dogecoin to the moon for good measure in the tweet.

As for Dogecoin’s social media fans, their reactions were mixed on DOGE’s price movement, while some thanked Musk for his efforts, the others blamed community members for not holding on to their investments. 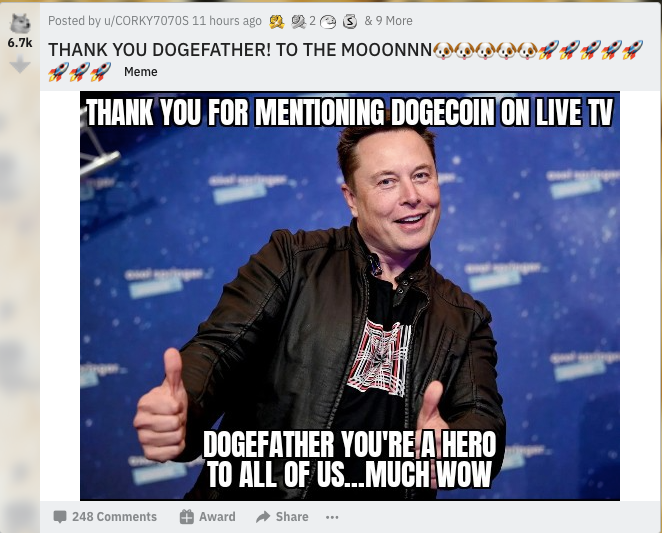 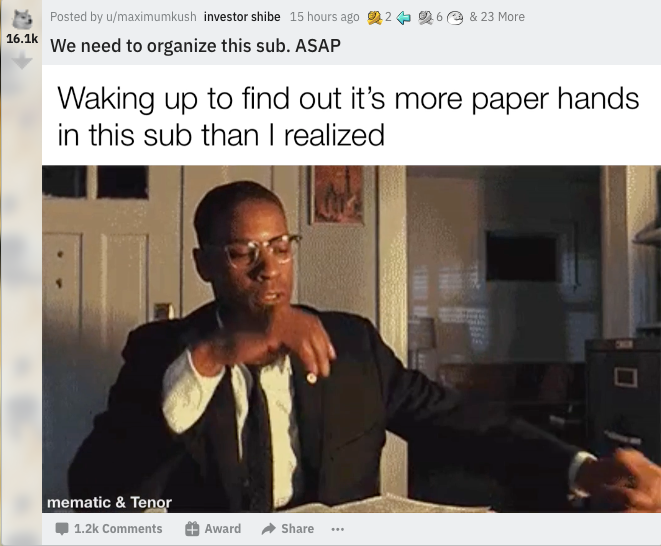 Benzinga’s Take: With Dogecoin seeing a dizzying rally amid speculations over the appearance of the meme crypto in Musk's SNL episode, there were concerns expressed ahead of Saturday that there could be massive profit-booking; so, the market correction isn't exactly surprising.

Not to mention that there have been several instances previously where Muskian mentions have failed to budge the price of Dogecoin — for better or worse.

Reddit user u/Happyis2cool on r/Dogecoin community shared their thoughts that the Dogecoin community needs to "stop building hype around certain days like 4/20 or Elon Musk hoting SNL. The whales are watching and are purposefully causing dumps on days we build hype around."

Whether or not DOGE touches $1 is anyone’s guess at the moment, but as Musk said before his SNL appearance “please invest with caution.” That said, there is no lack of excitement surrounding DOGE and it would be interesting to see whether the Doge Army or Silbert will be proved right at the end of the month.

Read Next: Why Is Shiba Inu Suddenly Skyrocketing?