EUR/USD Forecast: Trades Near The 1.2000 Threshold, Bullish In The Near-Term

EUR/USD Current Price: 1.1979 The US Federal Reserve dot-plot hints at an ultra-loose policy for longer. US Fed chief Jerome Powell that “transitory” inflation won’t change their view. EUR/USD trades near the 1.2000 threshold, bullish in the near-term. 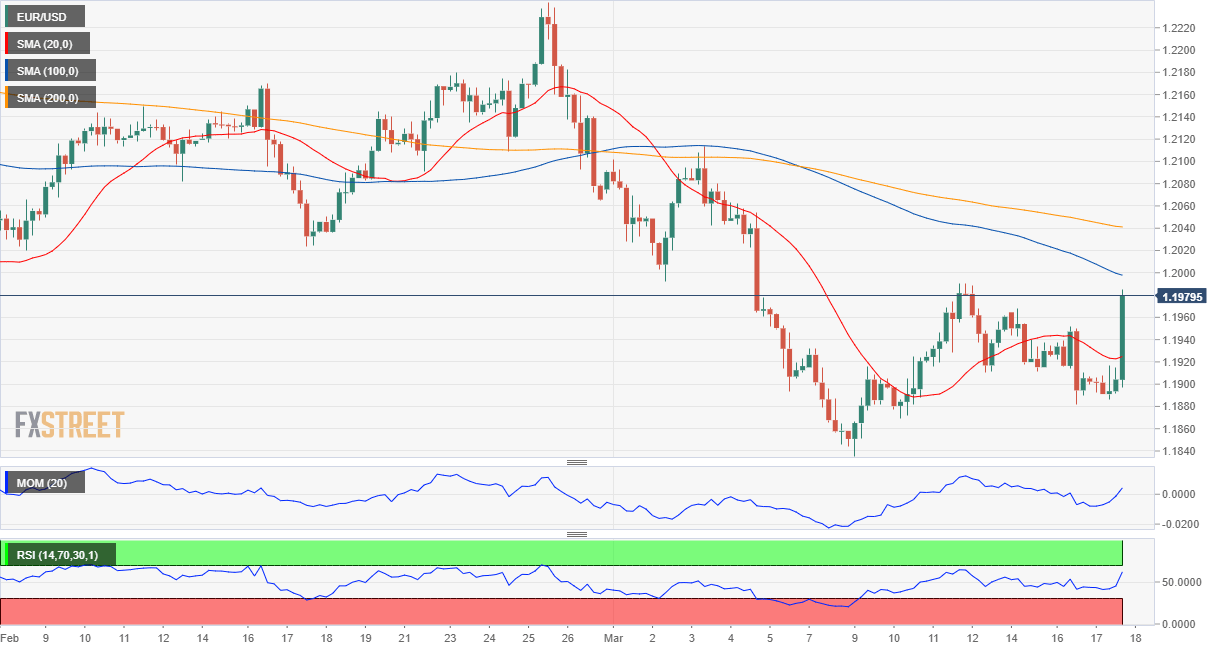 Trading was dull throughout most of the day, with EUR/USD stuck around the 1.1900 figure ahead of the US Federal Reserve monetary policy announcement. Ahead of the announcement, US Treasury yields reached fresh one-year highs, with the yield on the benchmark 10-year note reaching 1689%. The central bank left it unchanged as widely anticipated, although the dot plot showed that four out of seventeen policymakers see a lift-off in the fed funds rate from zero in 2022, compared to only one policymaker in December’s publication. Stocks soared, and the dollar plunged with the news, as that probably means no rate hikes through next year.

Even further, chief Powell said that “transitory” pressure on inflation won’t be enough to change their highly accommodative policy. Earlier in the day, the EU published the final version of February inflation, which met the market’s expectations by printing at 0.9% YoY. The core annual reading resulted in 1.1%. As for the US, the country published February Housing Starts and Building Permits, which were down by over 10% each.

On Thursday, the focus will be on a speech from ECB’s head, Christine Lagarde, due to speak at two separate event and the EU January Trade Balance. The US will publish weekly employment figures, with Initial Jobless Claims foreseen at 700K in the week ended March 12.

The EUR/USD pair trades near its post-Fed high at 1.1985 heading into the Asian opening, struggling around the 50% retracement of the November/January rally. The near-term picture has become bullish as technical indicators have crossed into positive levels, maintaining their bullish slopes. The pair has advanced well above its 20 SMA, approaching a bearish 100 SMA. The pair could extend its advance towards the next Fibonacci resistance level at 1.2070, once above the latter.