How Covid-19 Is Affecting The Cannabis Industry

The coronavirus crisis has caused dramatic shifts in how and when consumers spend their money, specifically with regard to consumer products—and cannabis is no different.

The coronavirus crisis has caused dramatic shifts in how and when consumers spend their money, specifically with regard to consumer products—and cannabis is no different.

Most states allowed cannabis dispensaries to remain open during lockdown, saving the nascent industry from the same fate as the rest of brick-and-mortar retail. But even though cannabis was deemed an essential industry, consumer habits changed nonetheless.

Perhaps buoyed by that “essential business” label, adult-use cannabis sales in the largest U.S. markets remained relatively resilient compared to other segments of the retail industry.

“What we’ve seen is that the average cart size at retail is going up,” said John Moynan, chief operating officer at SLANG Worldwide, a consumer packaged goods (CPG) company with distribution in 12 states. “People are buying more, and the average price per unit is going down, so basically people are bulk buying and looking for more value options.”

Experts agree that bulk buying at the outset of the pandemic was likely the reason for the increase in sales. But five months in, sales are still strong. 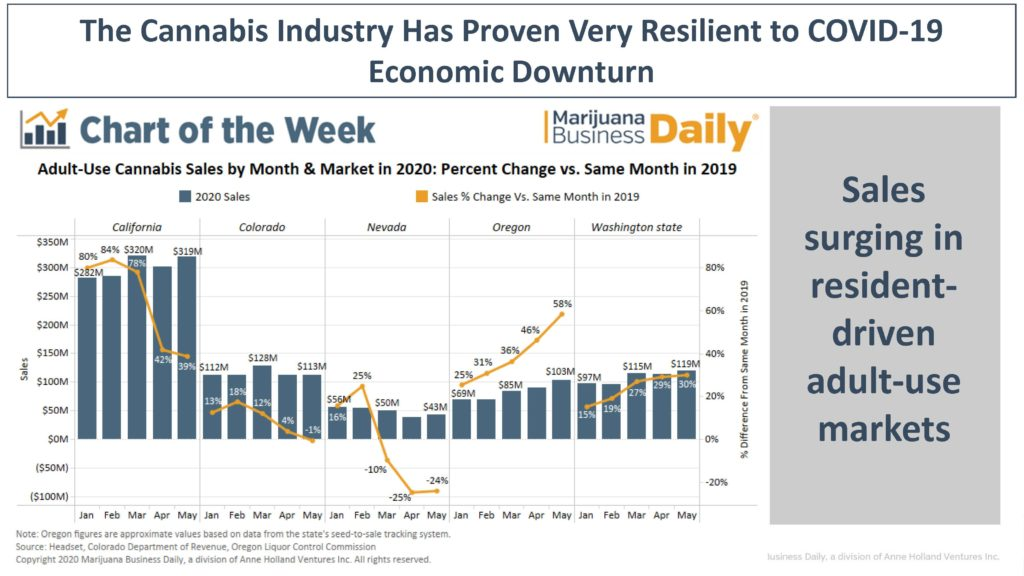 Even in newer markets like Michigan and Illinois, sales have elevated to the point where several states have set new monthly sales records this summer. 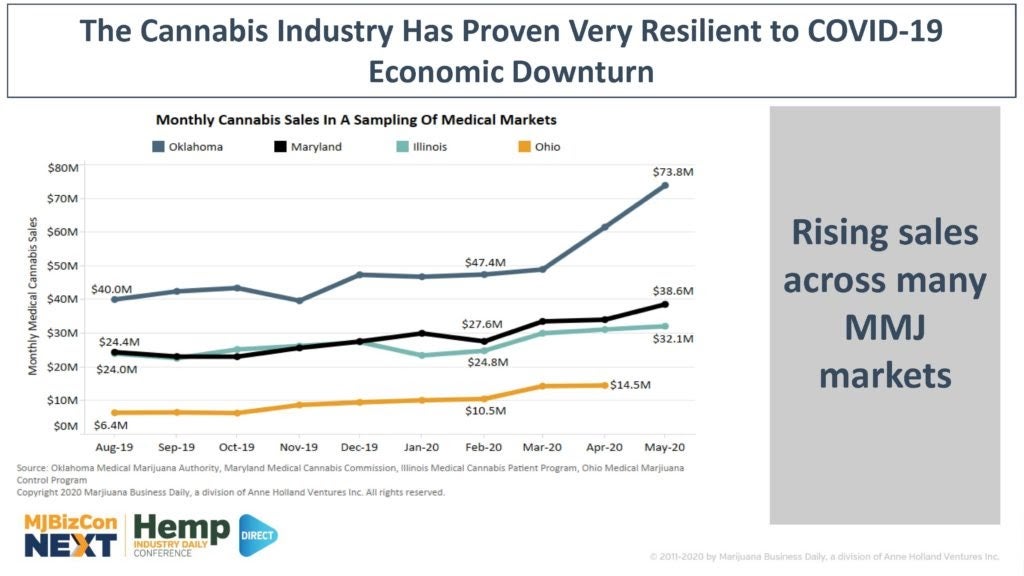 By some estimates, COVID-19 has changed the consumption habits of 70% of U.S. cannabis consumers, both regarding how they spend their money and how they consume the plant.

“When stimulus checks started going out, unemployment benefits started going out, that's when you really started seeing the shift, because now people were a little more mindful of their money,” said SLANG President & CEO Chris Driessen. “They were still consuming cannabis, but were a little more discerning about what specifically they were buying.”

Something else to consider is the decentralized nature of the U.S. cannabis industry. So not only are consumer habits changing, but how they change depends on how mature the market is.

“What’s driving consumer purchasing behavior in Oregon may be dramatically different than what's driving it in Colorado just because of the way that the market has evolved in each of those locations over their timeline,” said Moynan.

The relative success of the cannabis industry during the pandemic has brought several key industry questions to the forefront.

On the legalization front, the categorization of dispensaries as essential businesses during a public health crisis is a major step towards federal legalization. Even as Joe Biden has remained steadfast against marijuana decriminalization, Kamala Harris’ support of legalization could mean a Biden-Harris administration would take up the issue.

As it relates to cannabis businesses, Driessen believes that Covid-19 is going to accelerate trends that were already going to take shape, such as an increased value premium on specific brands.

“In pretty much every other mainstream industry, there's a premium that's put on brands,” he said. “A great example in a comparison we often use is Coca-Cola Co (NYSE:KO) and 7-Eleven. Traditionally they do roughly the same amount of revenue, but yet one gets almost a 6X multiple on their value and one gets 0.8 multiple. Well, why is that? They're doing the same amount of revenue, but it's because the profit margins are different. 7-Eleven has a lot of operating expenses and a lot of overhead to have that many brick and mortar stores and employees. Coca-Cola just doesn't have that same breadth of operating expense.”