EUR/USD Forecast: Fell Toward 1.1200, Heads Into The Weekend With A Bearish Tone

EUR/USD Current Price: 1.1223 US data was generally encouraging but failed to trigger some action across the board. The ECB  introduced a new repo facility for central banks outside the Union. 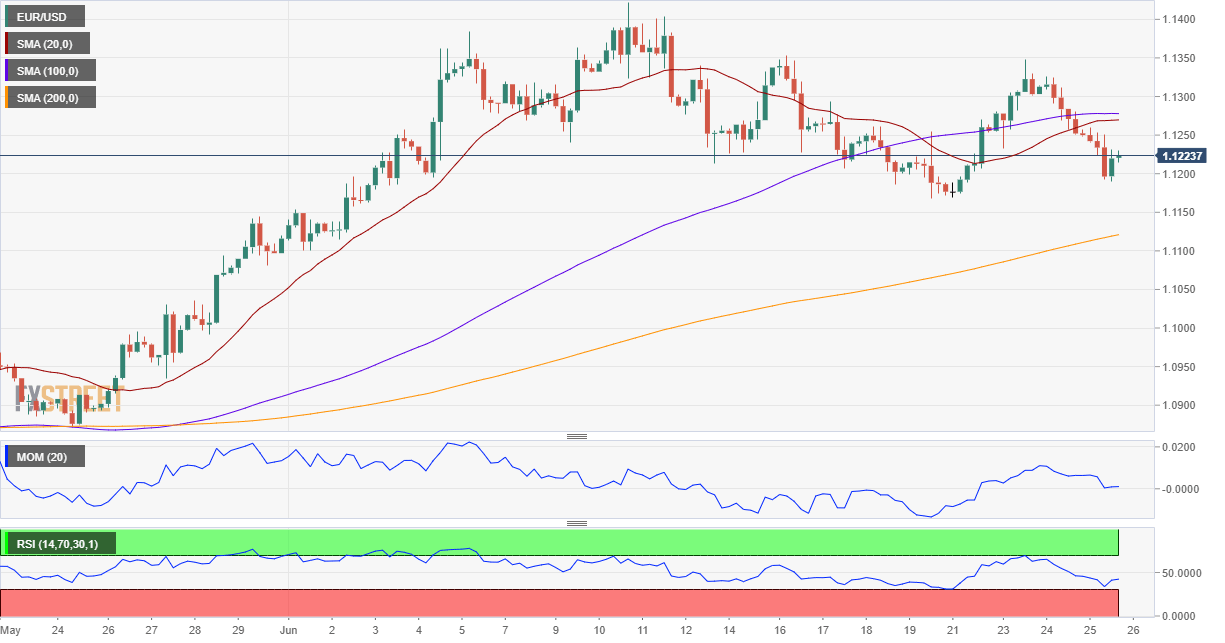 The EUR/USD pair is closing in the red for a second consecutive day, although the risk-related slump decelerated. The day started with risk-off spreading on the heels of mounting concerns about a possible economic comeback. The US reported the largest one-day number of new coronavirus cases on Wednesday, above 36,000, while the WHO warned that the curve is in the rise in Europe, with an average of 20,000 new cases per day and 700 daily deaths in the old continent. Hopes that economies could bounce in the second half of the year got smashed, and speculative interest is in the process of pricing that in.

The mood improved a bit after the ECB  introduced a new repo facility for central banks outside the Union, mean to address liquidity needs within the ongoing crisis. US data failed to impress, as Durable Goods Orders came in at 15.8% in May, much better than anticipated, while Q1 GDP was confirmed at -5.0%. Initial Jobless Claims for the week ended June 19 were above expected, at 1.48M,  while the Continuing Jobless Claims for the week ended June 12 improved to 19.552 M.

Friday will be a quiet day in terms of data, as the EU will publish money-related figures, while the US will unveil May’s PCE inflation and the final version of the June Michigan Consumer Sentiment Index.

The EUR/USD pair is trading between Fibonacci levels, still holding above the critical 1.1170 price zone, where it met buyers earlier this week. The risk is skewed to the downside, according to technical readings in the 4-hour chart, as the Momentum indicator heads firmly lower well into negative territory, while the RSI consolidates around 42. The 20 and 100 SMA converge around the immediate Fibonacci resistance at 1.1270, losing directional strength.