When seen from a US dollar (USD) perspective, the Norwegian krone (NOK) appears to be driven by two main factors: 1) the price of oil (Figure 1), and 2) the relative value of other European currencies. This isn't too surprising given that crude oil and its ref

When seen from a US dollar (USD) perspective, the Norwegian krone (NOK) appears to be driven by two main factors: 1) the price of oil (Figure 1), and 2) the relative value of other European currencies. This isn't too surprising given that crude oil and its refined products account for 30.5% of Norway's exports, with natural gas accounting for an additional 26%. Over 75% of total exports went to Europe (4% to Denmark, 8.5% Sweden, 20% UK, and 43% Eurozone).

Even compared to oil and other European currencies, however, NOK has been an underperformer, especially in the past six years. This is true versus the Swedish krona (SEK) (Figure 2), euro (EUR) (Figure 3), and British pound (GBP) (Figure 4). 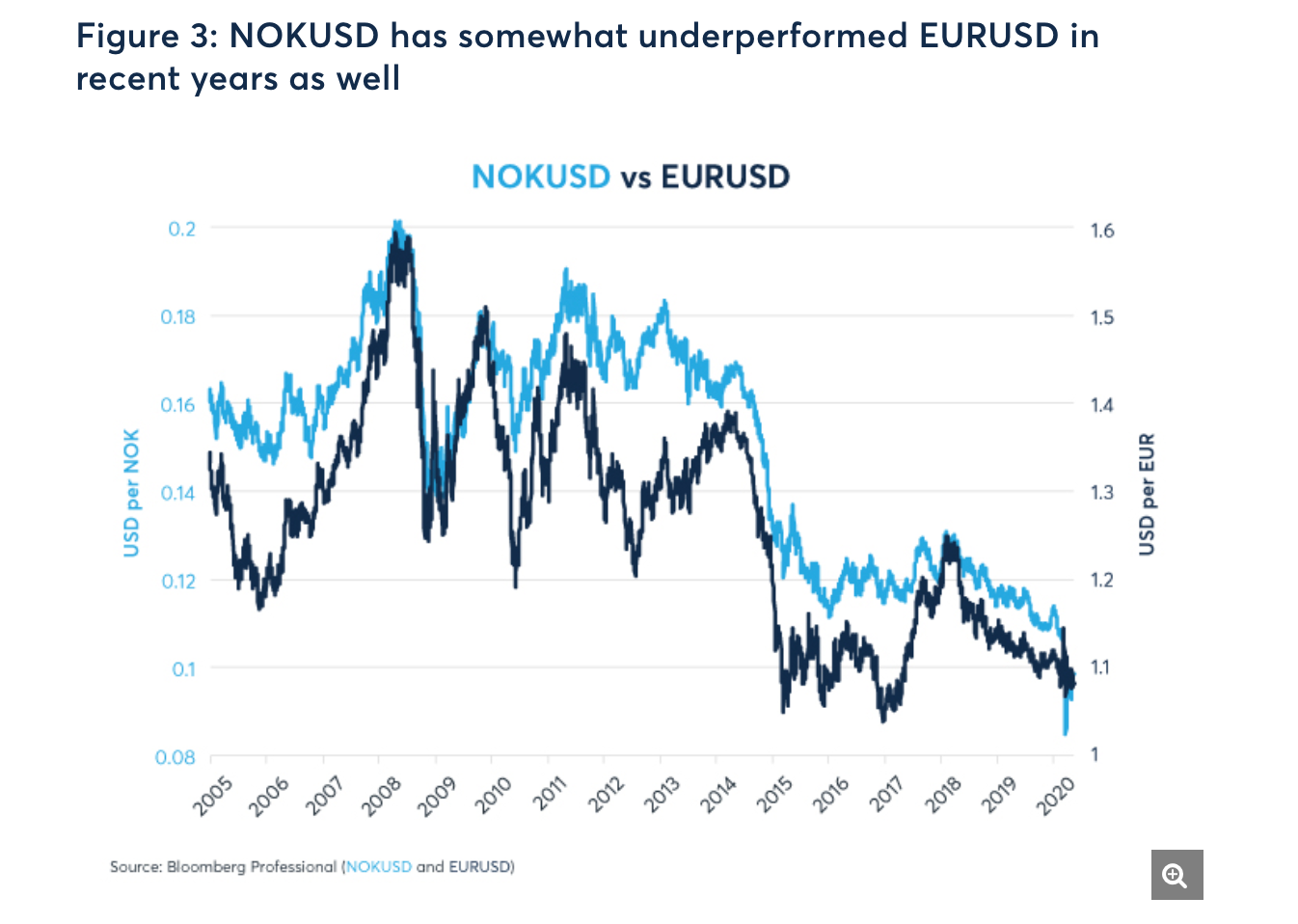 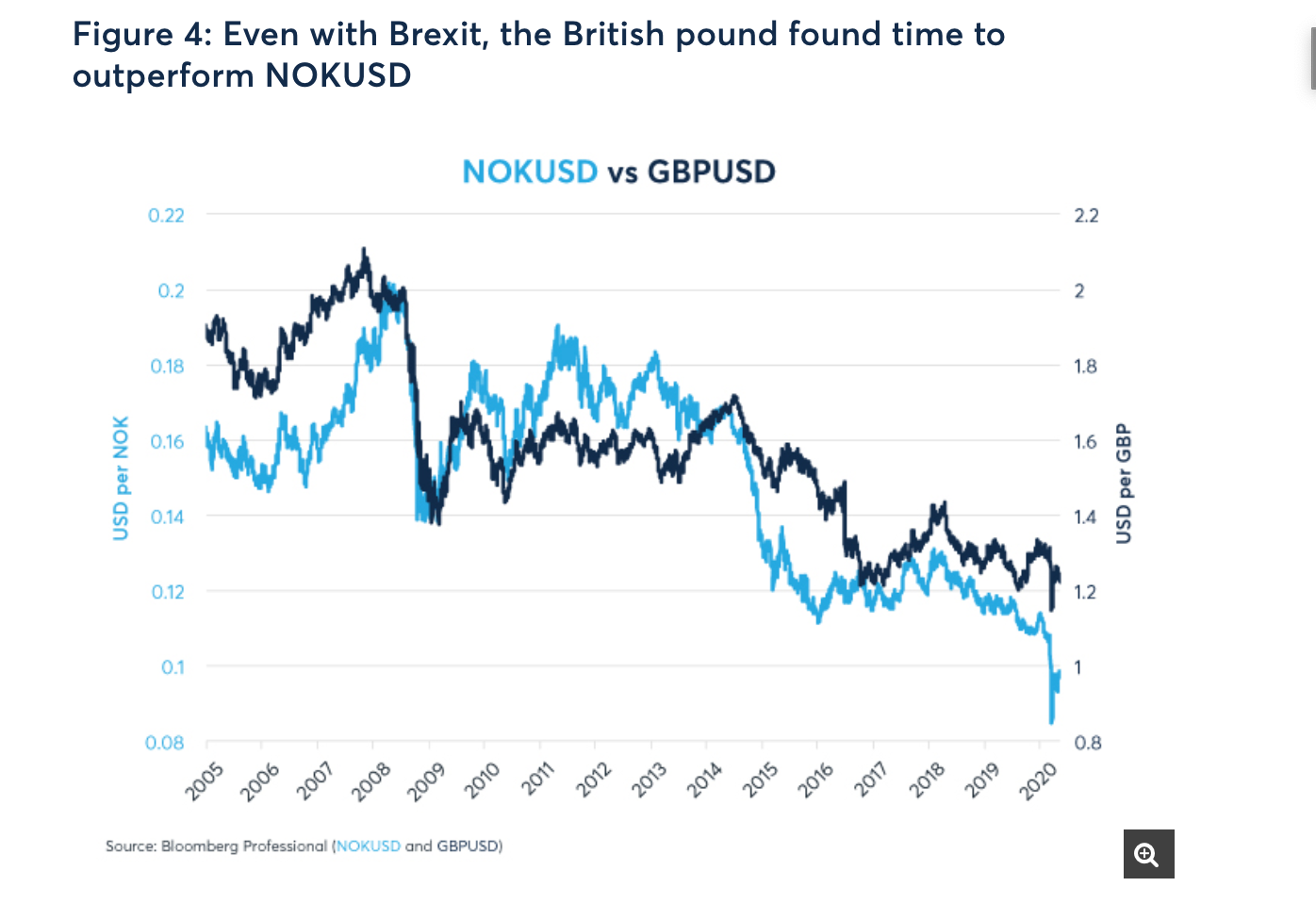 The reasons for NOK's underperformance are not tied to the usual suspects: central bank policy, excessive debt, or poor economic performance. Rather it comes down to one factor: diminishing oil production (Figure 5) and more recently falling oil prices.

In addition to falling oil production and prices, abundant US natural gas production and exports have caused the European price of natural gas to fall, converging with the much lower North American price (Figure 6), crimping Norway's export revenues.

While oil production made Norway one of the richest countries in the world, it also comes with a drawback: what is known in economics as the "Dutch disease." Dutch disease refers to countries with a great deal of oil or other natural resources having overvalued currencies that inhibit the development of other competitive export industries. Indeed, while Norway's neighbors have developed a variety of other industries such as telecoms, automobiles, electronics, furniture, and Legos, Norway remains heavily dependent on natural resource industries such as oil, natural gas, mining, and fishing. The decline in NOK vis-à-vis other currencies amounts to investors recognizing that Norway's declining oil production combined with the recent fall in prices will dramatically lower Norway's export revenues.

Despite the challenging environment for oil and natural gas, Norway looks strong in other respects, especially when it comes to its public sector balance sheet. Norway's government debt totaled 32% of GDP as of Q3 2019 – very low by any standard. Moreover, that debt does not factor the assets of the Government Pension Fund (dubbed the Oil Reserve Fund). Its assets total close to 200% of GDP. In essence, Norway's total public assets minus total public debt is equal to about 165% of GDP, an extraordinary fiscal position. Even deficit spending in response to the coronavirus outbreak won't substantially harm Norway's strong public finances.

Norway's $560 billion of foreign assets does present a dilemma. If they are repatriated, it could put support in Norway's currency, causing it to become overvalued versus its peers, hurting economic competitiveness in Norway's non-extractive industries which are already underdeveloped. Using the foreign currency reserves to support government spending could support economic activity in the short-term but might strengthen the currency, making it harder for Norway to develop other sources of growth beyond natural resources.

Norway's private sector debt is another story. Household debt is high at 100% of GDP and corporate debt is a lofty 132% of GDP. That said, GDP probably isn't the right yardstick for corporate debt since part of that debt burden is supported by corporate revenues outside of Norway. Even so, amid the pandemic, some of Norway's households and businesses may struggle to service their debts, although their position is probably more tenuous than business and households elsewhere in Europe or the US.

Norway's economy looked sound on the eve of the pandemic, but we don't really have enough data to assess how the country is doing on a relative basis since COVID-19 shuttered large portions of the Norwegian and global economy. That said, the combination of lockdowns, both domestic and global, and lower oil prices could put Norway's economy into a severe economic recession. In this context a weaker NOK, although mildly inflationary for Norway, should help to buffer the economy against some of the negative economic impacts of the pandemic. Moreover, in the long term, a weaker NOK could help Norway develop industries outside of the natural resource sector. Finally, the biggest upside risks for NOKUSD would probably be a rise in oil prices and a rebound in the currencies of Norway's European peers.