When investors first consider investing in commercial real estate, their initial thoughts often stray toward properties located in highly competitive primary markets such as New York City, Boston and Los Angeles. After all, the old mantra of “location, l

However, between capitalization rates and rental trends, the secondary and tertiary cities that represent commercial real estate’s middle-market can potentially outpace the historical trends within primary markets. And with these middle-market regions experiencing a significant influx of Millennial and Generation Z workforce finding jobs and building families outside of major metros

To this end, we’d like to dive into the reasons why many commercial real estate investors might have the wrong idea about what locations hold the best potential for growing their invested capital, and why we believe middle-market real estate provides a compelling value proposition.

Favorable Capitalization Rates In The Middle-Market

Among the most critical advantages of middle-market commercial properties over their primary market counterparts is a historically higher capitalization rate—the ratio of a property’s net operating income relative to its current market value. While past market performance offers no guarantee towards future developments, this historical track record can yield insights into potential developments down the line.

CBRE’s latest cap rate survey illustrates this advantage fairly concisely and indicates that over the previous seven years, the average cap rate for Class A multifamily properties within primary Tier I cities has routinely been below 4.5% whereas cap rates for Tier II and III cities have ranged anywhere from 4.5-7%.

These findings indicate that while Tier I cities are the central loci of business and cultural activity, from an investor standpoint these markets may not deliver the largest and most reliable returns from their income-generating activities.

While there are a variety of factors driving this disparity in cap rates, the most consistent features depressing rates in major metros compared to secondary or tertiary markets are steep property valuations and the high degree of capital required to fund them.

According to CBRE’s latest U.S. Net Lease Investment Report, net-lease investment volume for the top five U.S. markets was nearly equal to that of the next 15 largest markets combined. This type of capitalization within primary markets underlies the fact that these markets remain a popular investment choice among a wide array of institutional and foreign investors who can allocate massive amounts of capital to finance pricy real estate projects.

However, with this top-heavy investment landscape revealing the extent to which major metros are both expensive and well-funded, the rate of return from the income-generating activities of these properties may suffer when compared to the market value of the properties themselves. Lower deal volume and relatively lower prices in secondary or tertiary markets allow lease rates to have an outsized effect in pushing up the capitalization rates of local properties.

As a result, the middle-market has grown increasingly enticing to a broad spectrum of investors, and the diminished yield within primary markets has pushed many institutional investors to pay greater attention to middle-market properties. Underscoring this point is the fact that according to a 2019 overview from research firm Real Capital Analytics, secondary and tertiary markets saw an 8.3% increase in their pricing while primary markets experienced an 11% drop in investment sales from properties sold.

It’s not solely a lack of opportunity in primary markets which is driving the appreciation of middle-market real estate. Going forward, an array of fundamental leasing trends within secondary and tertiary markets are supporting investors’ yield expectations.

In terms of vacancy rates, 2019 was a great year for multifamily occupancy, with the national vacancy rate for multifamily units falling to its lowest level in nearly two decades. Zooming into the data below, we see that the cities with the highest positive changes in occupancy rate were overwhelmingly in middle-market regions, with the sole exception of Washington D.C. 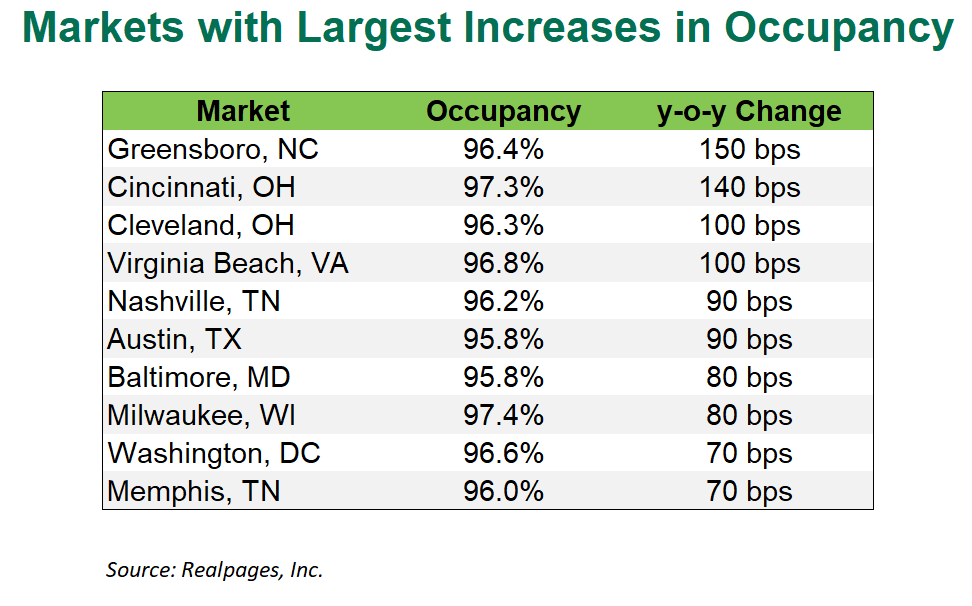 Meanwhile, vacancy rates for major metros have been generally less compelling. Manhattan residential vacancies have remained largely unchanged at between 1.5-2% through the past two years while the vacancy rate for downtown Los Angeles is as high as 9.2%,  according to real estate appraiser Miller Samuel Inc. Rental price trends outside of major metros also point to better long-term appreciation for middle-market properties. According to Zillow, cities like Las Vegas, Charleston, and Phoenix posted upwards of 5% year-over-year rent growth, while many flagship cities like Boston, Los Angeles and Chicago posted growth at or below the national average of 2.9%.

These multifamily rental trends are influenced by the expanding presence of major employers in cost-effective, highly educated middle-market territories. Office leases statistics in many of these secondary and tertiary markets have shown similar strength in recent years, and CBRE’s 2019 survey found that cap rates for Class A office leases in Tier II cities are uniformly at or above 6%.

Tech industry expansion has been a core driver of this growth in office demand. Since 2017, middle-market cities like Austin and Nashville have seen tech jobs increase by 9.6% and 22%, respectively. Meanwhile, office rent growth in those cities has been 8.5% and 12.2%, according to an industry report from CBRE highlighting the top 30 U.S. technology office markets.

In tandem with this significant uptick in business expansion beyond Tier I cities is a multi-year surge in millennials and members of Generation Z migrating away from the major metro areas in favor of the middle-market path. This shift is largely due to the high rental and real estate costs in those urban cores outlined in Zillow’s recent report on U.S. housing affordability. And, since these generations are posting the lowest rate of homeownership of any previous generation as well as the lowest levels of economic attainment, as outlined by the Urban Institute’s study on millennial homeownership, the rental market for these areas stand to benefit as much if not more than the overall real estate market.

While the market dynamics illustrated above are backed by historical figures, the past offers no guarantee toward future events. Instead, the most compelling argument for secondary and tertiary real estate markets lies in the burgeoning demographic shifts that show the Millennial and Generation Z workforce finding jobs and building families outside of major metros, in favor of smaller metros and conveniently located suburban markets. Ultimately, we expect these demographic changes to galvanize the overall commercial real estate market over the next several years.

This isn’t to say the sun has set on Tier I properties. Rather, investment decisions should always be made on the basis of thorough, case-by-case fundamental analysis set against the backdrop of a wider macroeconomic context.

To that end, iintoo fulfills this need by identifying and vetting premium commercial real estate across a broad distribution of U.S. submarkets. The company’s first offerings of 2020 spanned Las Vegas, the Salt Lake Metro Area, and Queens, NY, and as the year continues to unfold, investors keen on getting into commercial real estate can benefit from broadening their geographical scope and diversifying their portfolio.

Becoming an iintoo member is easy. It's free to join, and there's no commitment. Simply click here and sign up.

This is an advertisement for iintoo.com. Securities offered through Dalmore Group LLC, a registered broker-dealer and member of FINRA/SIPC. This is not an offer to buy, sell or trade securities. Investments are not FDIC insured, have no bank guarantee, and may lose value. For more information please read our full disclaimer.