Bulls And Bud Of The Week: The Democratization Of Cannabis Investing And Mat Fraser's CBD For Crossfitters

Welcome to another issue of Bulls and Bud of the Week. Changing The Cannabis Game With Growing Talent One of the main reasons I’ve long been an advocate of legalization is because I abhor the war on drugs.

Welcome to another issue of Bulls and Bud of the Week.

One of the main reasons I’ve long been an advocate of legalization is because I abhor the war on drugs.

This was a war that was started in the 1930s by a man named Harry J. Anslinger, who essentially launched the prohibition on cannabis in an effort to persecute people of color. He was the country’s first drug czar, and is known for saying some pretty outrageous things, such as…

This all went down nearly a century ago, and has since been outed as a violent attack on people of color, as well as poor folks. Yet to this day, cannabis, on a federal level, is still illegal. It’s absolutely absurd, and arguably a violation of human rights.

So when I saw the opportunity to invest in, and empower the cannabis industry, I took full advantage. And what has made this so gratifying is that I’ve been able to help a lot of people make a lot money in the process.

See Also: Bulls And Bud Of The Week: Preparing For A Cannabis Stock Rebound And Getting Creative With A gen!us Jack Herer

Of course, even with more than half the states in the US having legalized cannabis in some form, the federal war on drugs continues to negatively affect the people it was designed to hurt in the first place.

Our prisons remain overcrowded, mostly with black and brown non-violent drug offenders, and the neighborhoods and communities that have been ravaged by the war on drugs, remain ground zero for continued injustice.

It’s just a matter of righting a long history of wrongs.

But if you look at the industry today, it’s not the folks that have been most negatively affected by the war on drugs that are profiting from this new and vibrant marketplace. In fact, it's mostly those who have never been victimized by the war on drugs at all.  Folks that simply had the necessary mountains of cash to skate right in, with no baggage of former drug charges or convictions.

As well, it’s also former politicians who once supported the prohibition of cannabis, but now sit on the boards of public cannabis companies while making millions of dollars in the process.

Although I don’t typically support government interference in any industry, I do believe it’s important that states that rake in millions of dollars from cannabis sales do their part to ensure that those who have been negatively affected by the prohibition on cannabis, have an opportunity to get some of this action, too.

This is why I’ve been so supportive of social equity programs that have been launched in parts of California, Massachusetts, and other states that have already legalized cannabis, or will be legalizing in the near term.
And it’s also why I’ve been particularly supportive of companies that are laser focused on ensuring that those who have been most victimized by the prohibition on cannabis are able to get a seat at the table. And do so while generating real revenue.

Growing Talent is one of those companies.

Growing Talent is a California-based cannabis and technology company that operates an equity incubator that serves as a turnkey solution for entrepreneurs to open their own dispensaries.

And unlike a lot of other young cannabis startups, Growing Talent actually generates revenue. :)

Since its inception, Growing Talent has generated nearly $4M in revenue, with more than $200k in monthly recurring revenue.

The company essentially guides minority business owners through the entire process of operating a cannabis business, while using the company’s own proprietary software and systems: from concept to opening their doors, similar to franchising opportunities you might find with companies such as Chick-fil-A, Edward Jones, or McDonalds.

Growing Talent also provides its technology and mentorship at a fraction of the cost to people of color who otherwise wouldn’t have the means to do so.

This is the perfect example of implementing social justice and social equity mechanisms in the cannabis industry by utilizing the basic fundamentals of free market capitalism. It’s a beautiful thing. Doing well, by doing good. :)

And here’s another great thing about Growing Talent …

Instead of doing some kind of reverse merger or launching an IPO where only the wealthiest one percent can participate before the company goes public, Growing Talent decided to use an equity crowdfunding platform to raise capital, thereby allowing anyone who wants to participate, the opportunity to do so.

The truth is, Growing Talent's mission is to help women and minorities succeed in the cannabis industry. And through crowdfunding, it can democratize this incredible movement and shift the status quo from solely the super-wealthy to anyone who wants to get involved.

We know that the majority of Americans support legalization, but very few people beyond institutional investors and very wealthy individuals have opportunities to participate financially. But management wants to create a national brand whose ownership reflects its audience, and they believe there’s a seat at the table for anyone who wants it.

See Also: Bulls And Bud Of The Week: How To Get A Piece Of The Mexico Cannabis Market And Fast-Acting Edibles With Sunderstorm

As CEO Rashaan Everett said, “We want everyone, regardless of their resources or background, to be part of the most important new industry to emerge in our lifetime.”

I Got This CBD From The Fittest Man On Earth: Mat Fraser

If you’re a regular reader of these pages, you know that I haven’t had much success with CBD.

While I know it has helped a lot of people, I’ve never really found much use for it, as most CBD I’ve tried simply did nothing for me.

But when I heard that professional crossfit athlete, Mat Fraser - also known as the fittest man on earth - had developed his own CBD product. I had to try it. 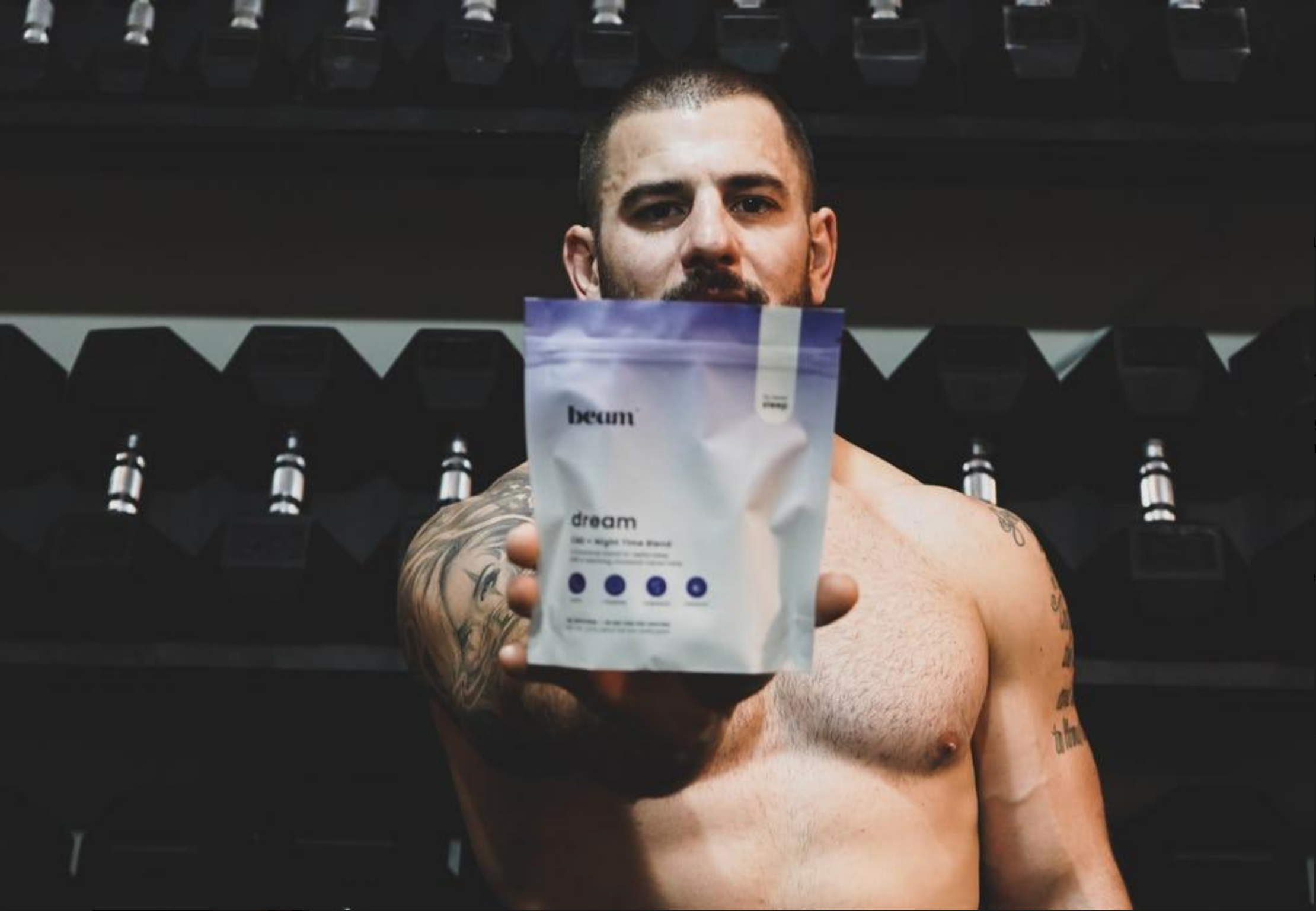 Image courtesy of the company.

As a crossfit addict myself, I’ve been a huge fan Mat Fraser.  In fact, I’ve watched a lot of his performances on youtube, and often use them as motivation for myself.  So when I got word that he had his own CBD brand, I had to try it.

After all, in the world of health and fitness, Fraser is a highly credible individual.  And if he’s backing this CBD product, there must be something to it.

And it’s the real deal, folks.

It’s a combination of CBD, melatonin, magnesium, and L-Theanine, and it’s definitely helped me out quite a bit in terms of getting some very relaxing and uninterrupted sleep.

Of course, this is just CBD, and contains no THC.  So while you might find a good Indica to help with sleep, too, beam’s Dream won’t give you that euphoric feeling.  It will, however, lull you into a very restful state, and most importantly, allow you to get into a deep, peaceful sleep.  And as a bonus, it doesn’t make you feel groggy when you wake up.  For me, anyway, I feel very well-rested after a dose of Dream and a solid 8 hours.

The flavor is actually quite good, too.  I’ve been mixing mine - which is a powder - with hot water or hot milk to make a sort of hot chocolate.

I’m actually really impressed with this one.  And while this stuff isn’t going to turn you into a professional crossfit athlete, competing against the fittest people in the world, it will ensure that your body and mind is well-rested.  And sometimes, that’s half the battle when it comes to getting a good workout.

Hell, sometimes that’s just the battle when it comes to having a productive day.

Jeff Siegel is the co-founder and managing editor of Green Chip Stocks, a private investment community focused on socially-responsible investing. He is an expert in renewable energy and cannabis investing, has been a featured guest on Fox, CNBC and Bloomberg Asia, and is the author of the best-selling book, "Investing in Renewable Energy: Making Money on Green Chip Stocks."

The preceding article is from one of our external contributors. It does not represent the opinion of Benzinga and has not been edited.