We Tested Your Tesla Knowledge. Here Are The Results.

Despite the naysayers and short sellers, Tesla Inc (NASDAQ: TSLA) hit a new all-time high of $400 this week.

Despite the naysayers and short sellers, Tesla Inc (NASDAQ: TSLA) hit a new all-time high of $400 this week.

Although Tesla's fundamentals can be interpreted in different ways, some questions have more concrete answers.

To bring the bulls and bears together, Benzinga put together a TESLA quiz that everyone can agree on.

As it turns out, most people can't name Tesla's original founders. Even though he's the face of the company now, Elon Musk wasn't one of the original two. He came in during the second round of funding.

Elon Musk sent none other than his $100,000 Tesla Roadster into orbit.

Even though the Cybertruck shares quite a few similarities with the DMC DeLorean, Musk said the true inspiration behind the Cybertruck was James Bond's Lotus Espirit. 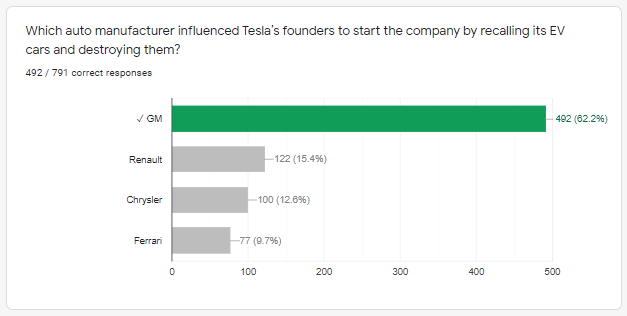 Tesla obviously wasn't the first company to try their hand at electric vehicles, but the company succeeded when others didn't. General Motors Company (NYSE: GM) got rid of its EV line and destroyed the cars, influencing Tesla to try their hand in the industry.

Photo by Steve Jurvetson via Wikimedia.